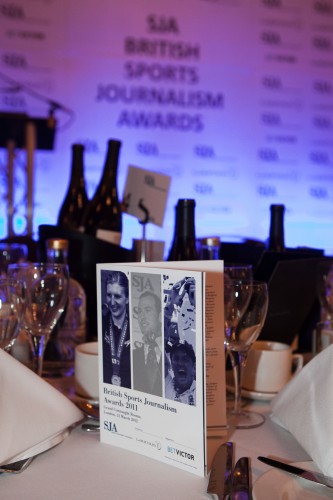 Congratulations are due to all short-listed entrants for the 2012 SJA British Sports Awards tonight, according to the organisers of the event.

There was a record entry across all the categories – sports writing, photography and cartoons – in the 36th year of the staging of these awards, with several high-profile past winners being among the leading contenders.

And for the second year, with the gala dinner supported by Laureus and BetVictor and held at the Grand Connaught Rooms in Covent Garden in central London, the all-ticket event is sold out, with nearly 400 guests from newspapers, websites, news and picture agencies, broadcasters, politics and gold medal-winning sports stars.

“Anyone short-listed for their category deserves huge praise,” Steven Downes, the SJA Secretary, said. “According to our judges, the competition this year in many of the categories has been as intense as anything seen in the stadiums at the London Games last summer.”

Tonight’s event begins from 6pm, with a champagne reception and viewing of an exhibition featuring many of the leading photography entries.

Awards presentations are expected to get underway after 8pm, and will be Tweeted from the event on the SJA’s Twitter account, @SportsSJA and with the hashtag #SJA2012 . A report and listing of the winners will be posted on this website from around 11pm.