in the next few weeks and is taking bookings now.

Thu June 26: An exclusive opportunity to meet, question and interview Dave Brailsford, performance director for British Cycling, the sport which many believe will deliver Britain’s biggest haul of medals from the Beijing Games.

Wed Jul 23: With the 2008 Games less than a month away, British Olympic Association Chairman Lord Moynihan will be on hand to discuss Team GB’s prospects in Beijing and in London four years later.

Tickets for each event are strictly limited and will be

available on a first-come, first-served basis.

Tickets cost Â£20 per lunch for paid-up SJA members, and Â£25 per lunch for guests, which covers an excellent two-course meal plus a pint of Fuller’s bitter or a glass of wine.

To book your place at the Brailsford or Moynihan lunch, contact Trevor Bond now by calling him on 01277 651708 or by e-mail to Trevjanbond1@aol.com. After July 7, please email your booking to stevenwdownes@btinternet.com 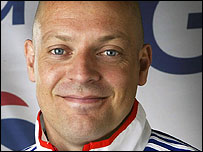 received an MBE in the 2005 after leading the British cycling team at the Athens Olympics, where they won four medals, two of them gold. Record-breaking performances from Brailsford’s teams have followed at successive World Championships since, with eight golds won at the 2008 edition in Manchester in March.

After four years racing in France and qualifications in sports science and an MBA, Brailsford was first employed by British Cycling as a consultant following the advent of lottery funding. He then moved on to become Programmes Director before becoming Performance Director.

the British rowing eight to silver at the 1980 Moscow Olympics and 1981 world championships. Given the political boycott of those Moscow Games, it was perhaps remarkable that Moynihan, Conservative MP for Lewisham East from 1983, became Minister for Sport in Margaret Thatcher’s government between 1987 and 1990.

Inheriting the title Baron Moynihan in 1997, he was Shadow Minister for Sport in the Lords from July 2003 to February 2005, before winning the election to become chairman of the BOA, probably one of the most influential and powerful positions in British sport in the run-up to the 2012 Games.