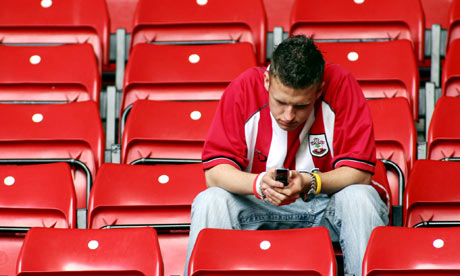 The Southern Daily Echo, which has covered Southampton FC for more than 120 years, still cannot get its photographer accredited for home matches at St Mary’s, nearly three months after a ban on all photographers was lifted following protest from an alliance of national newspapers and agencies.

“Everyone else, it seems, can send a photographer  apart from the paper which has covered and supported the club for well over 100  years,” Simon Carter, the Echo‘s sports editor, told sportsjournalists.co.uk.

The Echo‘s photographer was allowed in for the game against Tranmere last month, but last week’s online accreditation applications were still being turned down.

No official reason has ever been given for not allowing the local paper normal media access.

Although the paper is not banned from sending a reporter to home games, Carter has been told that they can have only one pass instead of two, despite a raft of empty seats in the press box for Southampton’s matches in League 1.

Chairman Nicola Cortese banned the Daily Echo for three months in the middle of last season, while every call made to the press officer during pre-season went unanswered.

“We have not been given an official reason or explanation as to why our requests for photographic passes are being continually turned down,” Carter said.

Just days before the football season was due to start, the club brought in a blanket ban on press photographers, saying it wanted to protect its commercial revenues.

The club’s scheme quickly collapsed, however, after a boycott of the club-supplied pictures, with The Sun refusing even to mention Southampton by name in its reports, while Digital South, a south coast picture agency, operated by SJA members, refused to take on work for the club syndicating its pictures.

Carter’s boss, editor Ian Murray, added: “We are disappointed that when the club lifted their complete photographic ban on all other media, including national newspaper and agency photographers, they failed to do so for us. The club have given no explanation for their actions.