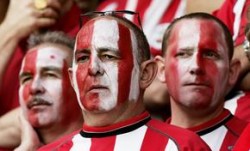 SJA member Robin Jones, who runs the Digital South photo agency, has refused to sign an agreement with Southampton to syndicate pictures on the behalf of the football club.

As reported earlier today, Southampton announced on Thursday that it would not accredit photographers from local or national newspapers or agencies this season, but would offer its own syndicated pictures.

Telegraph Media Group announced that it would not be using any of Southampton’s pictures, and the SJA recommended that sports and picture editors should consider not using any such pictures offered from St Mary’s.

Southampton lost their first League 1 match of the new season this afternoon, 0-1 to Plymouth Argyle, with just the photographers from both clubs in attendance.

But Southampton’s scheme appears to have run aground at an early stage, with Digital South declining to provide the pictures and syndication that the club required.

Jones was approached with a contract from Southampton on July 30, just seven days before the start of the new season.

“I disagreed with their stance on a total ban of photographers from any media source,” Jones told sportsjournalists.co.uk.

“I voiced this opinion to the club and genuinely thought that the ban would not take place. It became clear to me on Thursday that this ban was indeed happening and so I rang the club to inform them of my decision to decline their offer.

“Basically, a ban on photographers is simply a bad idea,” said Jones, whose agency employs two photographers, including his son, Michael Jones, also an SJA member.

“We felt that we were between a rock and a hard place, because we are sure that another agency or photographer might come forward to do this work for Southampton. But it is not something we are prepared to do.”

During Thursday and Friday this week, Jones informed the picture editors or picture desks of the Daily Star, the Daily Echo in Southampton, IPS, the Football League Paper and Pinnacle. “I told all of them that I would not be syndicating SFC pics,” Jones said.

Steven Downes, the SJA Secretary, said, “In these tough economic times for the media, Digital South has opted to do something which will cost their business.

“Robin and his colleagues should be thanked by all sports journalists for taking a difficult, principled stance.”

Jones says he is “very upset” by some trade reports which said that Digital South would definitely be syndicating Southampton’s pictures, but he is still hopeful that the club will listen to common sense advice and lift its ban.