Photographers were top of the agenda at a ground-breaking accreditation seminar organised by the SJA and UK Sport and supported by Pearce International.

SJA committee member Tom Jenkins of The Guardian has been a vocal critic of the way sports organisations often fail to cater for the needs of professional sports photographers.

He and long-time member Eileen Langsley were the driving forces behind this get-together, which attracted representatives from most of the major annual sporting events in the UK, as well as many national governing bodies and organisers of major events in 2019.

Langsley, who has covered 13 Olympic Games, was the first official photographer for the gymnastics international federation in 1983 but told the panel she struggles to get accredited.

The SJA has many photography members who have had to put up with inferior facilities, security issues with thefts, and the arrival of ‘amateurs’ who have been accredited and then get in the way.

This seminar, in which all the major photo agencies were represented along with Arsenal and Manchester United, provided a platform to air their complaints.

Had a great time shooting @bhorsetrials this weekend. Great access and brilliant that photography was taken seriously. This log was put in position specifically for us to put remotes on. Other sports please take not. Thanks @bhorsetrials see you next year. pic.twitter.com/EAsQIn8rJh

It also looked at the issues facing written press with Gerry Cox of  Hayters TV and SJA co-chair Janine Self answering questions. The day was moderated by Jayne Pearce (below), who has 30 years of experience in media operations and was London 2012’s press chief. 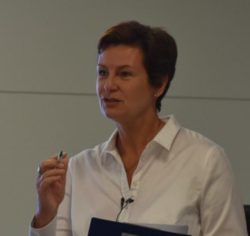 Questions for the attendees included: Who are genuine journalists? What defines a freelance? How do we allocate our space? Is the criteria for accepting and allocating accreditation inconsistent?

A representative from UEFA illustrated how the European governing body is tackling the extraordinary accreditation demands and how, over four years, they have cut their list from 12,000 to 4,000.

It was recognised that there is no catch-all solution. Some small governing bodies only occasionally have to cope with accreditation while the likes of Wimbledon, Rugby Premiership, RFU, football or ECB face big demands through the year and every year.