Racing Post’s Edward Whitaker, two-time SJA Photographer of the Year and three-time Specialist Portfolio winner, has been shortlisted twice in one category at the SJA 2020 British Sports Journalism Awards, sponsored by the National Lottery and Canon and announced today. Whitaker has two images vying for top spot in an Away from the Action category.

He faces competition from some familiar faces and also a new one – Manchester City club photographer Matt McNulty, who has also made the top six in the Football Portfolio category.

Clive Mason of Getty Images, a multiple winner over the years including Sports Photographer of the Year (Ed Lacey Trophy) in 2002, is named in the Away from the Action, Canon Sports Portfolio, Specialist Sports Portfolio and Sports Picture categories. 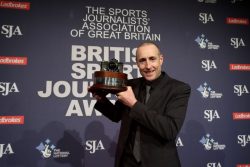 Alex Livesey (left) also of Getty Images and winner of the Ed Lacey Trophy in 2016, is shortlisted in the Football Portfolio category, as well as the Canon Sports Portfolio. The trophy is awarded to the overall best sports photographer of 2020, who has demonstrated an outstanding range of photographic skills.

There are no women through to the senior shortlists this year but there is a glimpse of the future with Danehouse’s Chloe Knott – silver medallist last year – Molly Darlington of Reuters and Action Images and freelance Morgan Harlow in the hunt for young photographer.

Matthew Fearn, chair of judges, said: “In such an unusual year, the first class standard of British sports photography has continued to shine, as demonstrated by all the shortlisted photographs.”

Head to the complete gallery from every photography shortlist HERE

Head to the writing shortlists HERE

CANON SPORTS PHOTOGRAPHER OF THE YEAR

The Ed Lacey Trophy is awarded to the photographer who, in the opinion of the judges, has been the overall best sports photographer of 2020 and has demonstrated an outstanding range of photographic skills. This will be judged on submitted entries into the categories listed below. All other awards are subject to entered submissions which are then put before our panel of judges.

The winners will be announced at a virtual ceremony on Monday March 15.