The writing shortlists for the SJA British Sports Journalism Awards, sponsored by the National Lottery and Canon, are announced today and rubbing shoulders with football journalism’s heavyweights, while also in contention for the Young Sports Journalist of the Year award, is Katie Whyatt of The Athletic. 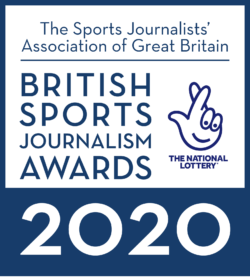 Whyatt, the women’s football correspondent, is up against colleague Daniel Taylor – four-time winner and 2017 Sports Writer of the Year (John Bromley Trophy) – as well as Telegraph duo Jason Burt and Sam Wallace, Guardian’s Jonathan Liew and Henry Winter of the Times.

Martin has also made the shortlist for Sports News Reporter, a category which includes four-time winner Matt Lawton of The Times, and David Conn (Guardian), who has won on three occasions. The Telegraph’s Burt, Jeremy Wilson and Kate Rowan are gunning on three fronts along with Matt Slater of The Athletic and Steve Scott (ITV News).

The Specialist Correspondent category has been the preserve of the Daily Mail for the last two years so David Coverdale and Jonathan McEvoy will be hoping to extend the run. McEvoy won the award in 2018 with Al-Samarrai following last year. The Sun’s Ben Hunt, Matt Christie (Boxing News), Alan Dawson (Insider) and Nick Hope of the BBC – a bronze medal winner last year – complete a strong line-up.

Boxing News has hogged the Special Sports Edition category and will be aiming to make it five in a row but face competition from The Telegraph (Shutdown), Rugby World (The inclusive and diversity issue), the Daily Mail’s football supplement (The Verdict), Sky Sports (George Floyd 100 days on) and The Telegraph (Women’s sport monthly).

Will there be a new winner in the Rugby Journalist category? Stephen Jones of the Sunday Times took top prize in 2014 and 2016 but he is the only previous winner to make the shortlist. He is joined by colleague Mark Palmer, Guardian pair Michael Aylwin and Rob Kitson, Nik Simon of the Mail on Sunday and The Telegraph’s Daniel Schofield.

The battle for Sports Newspaper is always a hot one. The Telegraph took the title from The Mail last year, who have won five times in seven years.

The Athletic, who have only been in existence in the UK for 18 months, are nominated in the Digital Publisher category along with CNN Sport, Sky Sports, The Coaches’ Voice, The Telegraph and Wales Online. Digital Publisher, formerly Sports Website, recognises all aspects of an organisation’s digital performance including website, app (if applicable) and use of social media. 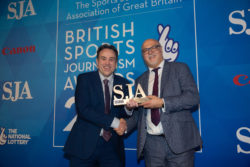 And finally the future. Molly Hudson of The Times and Tom Kershaw of The Independent were silver medallists last year. They are joined by Art de Roche (Athletic and Football.London), Chloe Merrell (GiveMeSport), Isaan Khan (Daily Mail), CNN’s Calum Trenaman. And Katie Whyatt, of course.

Colin Bateman, chair of writing judges, said: “There is clearly plenty of life in the old trade yet judging by the feedback from a succession of judges who got in touch. There was genuine pleasure and admiration for the quality, range and originality of the entries in a year when locked down sport tested the ingenuity of our profession.”

The winners will be announced at a virtual ceremony on March 15.

Sports Writer of the Year

The winner of the John Bromley Trophy is selected by a panel of leading figures in sports journalism from journalists on the shortlist of any of the writing categories.