What have photographers made of working at the Rugby World Cup? Paris-based SJA member DAVE WINTER offers his personal views

The main cause of concern for many photographers has been the accreditation process. 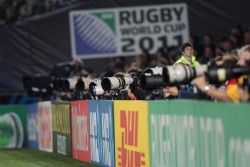 I received accreditation for all the matches that I requested, but a number of colleagues, including those who shoot primarily rugby for their living, found themselves either on waiting lists or denied individual match requests altogether.

It can be argued that demand for places is always going to be high for a World Cup, but I frequently found there were not only plenty of empty places, but also “photographers” who, judging by the equipment they were using, should never have been accredited for the tournament in the first place (a combination of “weekend warriors” or chancers who have seen press accreditation as a cheaper option than buying tickets).

The photographer rumour mill has gone into overdrive on this subject, though its been suggested that the accreditation advice of a senior photographer and an experienced venue photo manager was largely ignored by those organising accreditation.

I shot matches and Twickenham, Wembley, the Olympic Stadium, Milton Keynes and Cardiff (my World Cup ended at the quarter-final stage, with the abject capitulation of France). And for the first time ever, it was simple to send pictures from Twickenham and Cardiff. Pitchside ethernet connection for each photographer (plus power supply) was a real boon, and saved that awful half-time/full-time dash back to the Wire Room in order to pick up a wifi signal (a particularly arduous trek at the Millennium Stadium).

With the exception of Milton Keynes, there was adequate working space in the photographers’ rooms and the hot and cold meal voucher system worked well.

One final bugbear is the issue of parking. We photographers were led to believe that we would have priority for parking spots (we do, after all, have to lug 25kg of kit around with us). However, for the France-Canada match at Milton Keynes, in a stadium that is surrounded by enormous car parks, I was refused a parking spot (despite telling Press Operations three months in advance that I was coming by car, and then reminding them of this at regular intervals thereafter).

Likewise, for France’s quarter-final at the Millennium Stadium, I would like to know who would merit higher priority for a parking place than a car containing four photographers driving from Paris to Cardiff for the game.