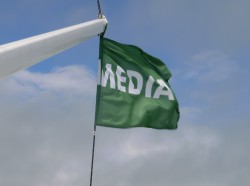 The Olympic sailing regatta is sure to provide the biggest challenge for media covering the 2012 Games. Britain’s historic success in the sport guarantees intense interest, but with courses stretching out across Portland Harbour and Weymouth Bay, it is one of the biggest fields of play in the 2012 Olympic Games and certainly the most unpredictable.

The test event staged there this past fortnight put media arrangements under the microscope at the venue in Portland, a 20-minute drive from Weymouth town centre.

As racing progress is difficult, if not impossible, to follow from the shore, organisers have hired an armada for officials and for the media. High speed boats will take up to 70 photographers on to the water each day. Three larger launches will enable the written press to get a closer look at the action – up to 60 journalists can be accommodated in this way, but exact numbers will depend upon the conditions.

“It does make life a little more difficult for us, but we need the media and they need to get to the action so it is something we accept,” Rob Andrew, joint venue general manager, said.

Among the official craft will be a start boat called Gyrinus, a nod to Britain’s motor boating champion in 1908.

The progress of our media vessel at the test event was rather more sedate, and the ride a little bumpy. The skipper told me this was one of the good days. Before we had even left the harbour he pointed out “some do get seasick”, and advised that those looking to cover sailing at the Games, perhaps for the first time, might want to forego the traditional English breakfast.

Next year, those interested in a specific races will be grouped together to allow for greater flexibility in returning to shore to file.

Of the 10 classes to be contested at the Olympics, windsurfing was easiest to follow, thanks to a slalom portion on the course. The racers pass right in front of the Nothe, a fort where spectators will watch during the Games.

For journalists who choose to follow proceedings from the shore, the progress of the races will be beamed back in real time. This week London 2012 have been testing a Global Positioning Satellite system similar to that used at the America’s Cup. The technology has moved on since the last Olympics and has been developed by sponsors Omega and Swiss timing. Tiny watertight boxes on board the racing boats relay positions to a start boat and from there to an onshore receiver at the National Sailing Academy. From here, live 3D computer generated images will be available in the venue press centre.

“This will help because our sport will now have the same level of information available to the media as in all the other Olympic sports even if they do not get out on the water,” Andrew said.

“Where the distance between boats is the story, the television director will be able to pull the images and use them in the broadcast coverage,” he said.

The sheer number of boats involved has created a few difficulties for the boffins. They will continue testing with much larger fields at the world championships this December in Perth, Australia, but they are confident that any glitches will be ironed out in time for 2012.

“We still have some technology problems but they are covering a huge area of racing and we are getting there,” Alastair Fox, the International Sailing Federation technical delegate, said.

This week, non-rights holding television companies were permitted to film, but next year the water will be off-limits for them as the Olympic Broadcasting Service will supply coverage for rights holders throughout the world. They will offer live daily coverage from one of the courses. Complex broadcast and new media rights contracts mean that we are unlikely to see official Twitter boats, used so successfully at the Youth Olympic Games in Singapore last summer.

The venue press centre itself has space for 185 with an overflow area in the media conference room. Organisers expect interest to be at its height for the medal races in the closing stages of the regatta. Introduced to make sure interest is maintained to the very end, they are not finals in themselves but even if a sailor is mathematically certain of victory by the last race, he or she is still obliged to take part in the medal race.