By Barry Newcombe
Philip Brook , the new chairman at Wimbledon, forecast  a “somewhat chaotic” period in the three weeks which will turn the tournament venue into an Olympic competition site next summer. 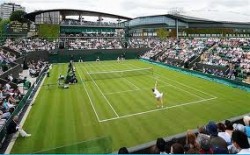 Speaking to the Lawn Tennis Writers’ Association lunch at Rafa  Nadal’s favourite London restaurant, Cambio de Tercio in South Kensington, Brook said that things were on track for the Olympic tennis.  “In terms of overall planning for the event, things are going smoothy,” he said. “In the period between the championships and the Olympics, it will be very busy and somewhat chaotic.”

Wimbledon will look considerably different  for the Olympics, with new scoreboards on all of the competition courts just one of the factors.  Of Wimbledon’s 19 courts, 12 will be for competition during the Games, the others for practice.

“The issue is one of presentation, to play good tennis on,” Brook said. “We have conducted an experiment with pre-germinated  grass seed, how long the new grass will last is questionable.”

This year, Wimbledon used its Centre Court roof on five days and although No 1 Court was built “roof-ready”, the biggest argument against having a roof fitted to the second show court would be financial.

Following the controversial scheduling of this month’s US Open due to adverse weather and a lack of roofed courts, Brook said a second roof at Wimbledon was “a desirable thing to have”.

But Brook ruled out any change in scheduling of games on the Centre Court that might suit American broadcasters. “Evening tennis was never in our minds when we built the roof,” he said. “We will not schedule night tennis in fine weather.”