Complaints to the Press Complaints Commission about the inaccuracy of the front-page headline of The Times on the day after Andy Murray’s Wimbledon victory has prompted the paper to issue a correction. 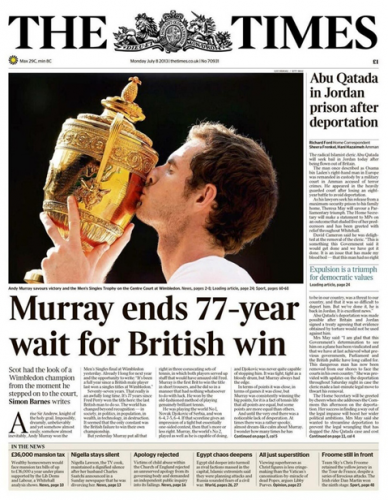 The headline declared “Murray ends 77-year wait for British win”. While the Simon Barnes article accompanying it referred to the men’s singles title, the newspaper has now stated, “Since Fred Perry’s 1936 victory in the men’s competition, singles titles at Wimbledon have of course been won four times by British women, most recently Virginia Wade in 1977.”

They omitted to mention that Murray had, of course, himself won at Wimbledon less than 12 months before (in the Olympic men’s singles), and that there had been Wimbledon championship wins for various doubles combinations in the past decades, too, including Jonny Marray in the men’s doubles last year.

The complaints to the PCC may not have mentioned these other Wimbledon winners.