The Nationwide Football Annual, the 2012-2013 season edition published this week, is 126 years old – making it the world’s oldest football book. 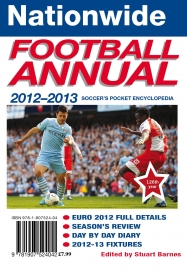 The latest edition – the 13th to be edited by Stuart Barnes – is packed full of information vital for the football fan, from team line-ups to international results, from international appearances and goalscorers to the sort of trivia to keep a pub quiz in questions for another 126 years.

The book contains everything anyone needs to know about the game – league and non-league – in Britain, Ireland and throughout Europe.

Included are: results from the European Championships, results from the 2011/2012 season (including domestic and European cup competitions and international matches involving British teams); full fixture lists for the 2012/2013 season; all major European and world football awards; a day-by-day diary highlighting the season’s biggest stories; players and their appearances for each and every league club.

The Nationwide Football Annual is available in good book shops, or can be ordered online here.