Stoke and Bolton being drawn together for next month’s FA Cup semi-finals may recall the day in 1946 when the sides played on despite the worst crowd disaster in history going on around them.

As  ANTON RIPPON writes, not until after Hillsborough in 1989 were the lessons properly learned

All roads leading to Burnden Park were packed on March 9, 1946. Bolton Wanderers were playing host to Stoke City in the second leg of their FA Cup quarter-final tie, and the visitors had Stanley Matthews in their ranks.

Bolton held a two-goal advantage from the first leg. Would they prevail? Could Matthews, who had spent most of the war guesting for Blackpool where he was station in the RAF, turn the tie Stoke’s way? More than 85,000 people wanted to see the outcome at first hand. But the record attendance – and the capacity – for the ground was just under 70,000. It was the proverbial disaster waiting to happen. 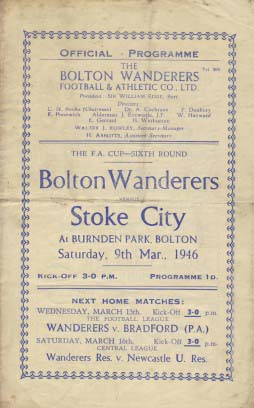 Burnden Park stood on the south side of Bolton, about half a mile from the town centre. Throughout the morning crowds built up in the streets around the ground as supporters arrived early.

Home fans queued up, waiting for the turnstiles to open. They were joined by away fans who had arrived on early trains before making the 10-minute walk from the railway station. There was no segregation of rival supporters, no thought of crowd disorder. Everyone had come to see a football match, not to cause trouble.

When the gates opened at 1pm, tens of thousands moved forward in orderly fashion into Burnden to took up their positions on the terraces.

Yet still the streets were choked as thousands more supporters arrived. Not everyone was prepared to stand around for hours. Many could not anyway. First they had factory jobs to do, arriving at Burnden breathless after grabbing a cup of tea and a sandwich before jumping aboard a Bolton Corporation bus.

They, too, shuffled their way into the ground. Behind them still more fans flocked towards the stadium that, like almost all football grounds in Britain, had grown from small beginnings and had been extended with no real thought for crowd comfort. Health and safety wasn’t even a work in progress.

By 2.15pm – still 45 minutes to kick-off – conditions were already becoming uncomfortable both inside and outside the ground. The pressure was now so great around the turnstiles that many would-be spectators were being pushed up against the walls of the stadium.

On the terraces there was hardly any room to move. Small boys were being passed over adult heads to the front; extricating a bag of sweets or an apple from a jacket pocket became a physical impossibility; keeping one’s feet became a priority.

Yet still the turnstiles clicked and clattered, feeding more people on to the terraces. Those at the front were being pressed further forward, but it was now impossible to move in any direction.

Outside, the streets surrounding the ground were as packed as the terraces inside. There were no police radios; it was almost impossible for officers in the ground to communicate with those controlling the tens of thousands still hoping to gain admission.

A call from a PC Lowe to close the turnstiles reached the head checker too late to make a difference. Discomfort now turned to distress as people began to fall to the ground and others could not avoid standing on them.

With 10 minutes to kick-off, the crush outside the turnstiles was relieved almost at a stroke. A spectator, trying to escape the ground with his young son, had picked the padlock on a large exit gate designed to spill large numbers back into the streets at the final whistle.

But people were not leaving Burnden Park; thousands more were pouring in. The pressure on the terraces was now unbearable. At five minutes to three, a huge roar signalled the appearance of the teams. On the terraces, thousands craned their necks to catch a first glimpse of their favourites.

The sea of humanity swayed and rolled. Most were held in place by a series of strategically placed crush barriers that prevented the swaying masses from pressing down to the front of the terracing.

But there was one area, near the bottom of some steps, where no crush barriers had been erected. Thousands of people were compressed into this gap, funnelling down uncontrollably.

Then barriers elsewhere started to buckle under the strain, and down went the crowd, tumbling forward. Bodies began to pile up, two, three, four deep. Twelve minutes into the game, a police sergeant walked on to the pitch and spoke to the referee. Mr Dutton stopped play and took the teams off the field.

The players sat in their dressing rooms for 25 minutes. Word spread that two or three spectators had been killed. Then referee Dutton reappeared, telling the players that, on the advice of the chief constable of Bolton, he was resuming the game.

When the teams took the field again, they saw that the pitch had grown smaller. Thousands of spectators were sitting over the original touchline and new markings had been made with sawdust.

At half-time the teams turned straight round with no break. The players were unaware that this was English football’s worst tragedy: 33 people had been killed, over 500 more injured. Best to get the game over with as soon as possible said the officials. It ended goalless, Bolton were through, Stoke were out. That night few people really cared.

A Home Office enquiry, chaired by Ronw Moelwyn Hughes KC, found that while the Bolton club and the police had taken proper steps, the machinery was lacking.

The real trouble lay in the fact that there had been no scientific assessment of the ground’s capacity – this was simply regarded as the greatest number of people to have been safely accommodated there on a previous occasion.

There was also no means of knowing when the maximum capacity was about to be reached, nor facilities for the immediate closing of the turnstiles. An attempt had been made to open exit doors, but the keys could not be found.

Matters had been made worse by the fact that several turnstiles had been rendered unusable, which meant that over 28,000 destined for the Railway Embankment end had to enter from Manchester Road.

Also, ticket holders for the Burnden Paddock had been admitted through turnstiles in this area and then escorted around the pitch to their places, adding to the huge build-up in the north-west corner of the ground. In addition to those fans who had poured in when the exit gate was opened by a panicking spectator, thousands more had simply climbed over turnstiles and walls.

Some had walked along the railway line and down the embankment before breaking into the ground through a fence. One thousand people climbed over the entrance to the boys’ enclosure. They had free rein: the police were reluctant to release any officers from the Burnden Stand where they were guarding food stockpiled by the Ministry of Supply.

A relief fund for the injured and their families and those of the dead realised £40,000, and a series of Government recommendations were made so that, in future, football supporters could attend matches in safety. Yet despite the huge amount of money pouring into the game through the turnstiles in the post-war years, when players were still on a maximum wage, little was spent on ground improvements.

In January 1971, 66 spectators were killed at Ibrox when barriers on a stairway collapsed during the New Year’s match between Rangers and Celtic.

In May 1985, 56 people perished when a stand at Bradford City’s Valley Parade was engulfed in flames.

And 43 years after the Bolton disaster, the Hillsborough tragedy saw the death of 96 men, women and children, all crushed to death when too many people found their way on to a football ground terracing. Only then was the lesson of Burnden Park fully absorbed.