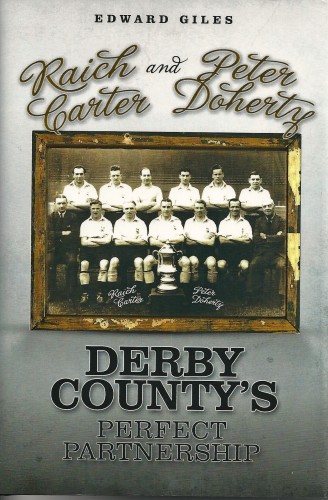 It was one of the highlights of my career, interviewing Raich Carter and Peter Doherty, great names in the history of my beloved Derby County, for BBC radio.

And what diverse characters they were. Carter, the silver-haired general who had once lorded over England’s midfield, had his scrapbooks laid out ready for me at his home near Hull.

“Look at that for a headline,” he said more than once.

Doherty, the flame-haired Irish trickster who danced his way through football in the 1930s, didn’t really want to talk about himself. He was keener that I should tuck into the large lunch that his wife had prepared at their home outside Blackpool.

Carter possessed huge self-confidence. When he walked into a room, even if you’d not known what it was that he did, you would have known that he was supremely good at it. Doherty was self-effacing but nevertheless carried around with him an outsized sense of injustice.

They were chalk and cheese. Except in one respect: they were both brilliant footballers who came together for a period, relatively fleeting in most respects, but long enough to create one of the greatest eras in the history of any football club.

They formed “the perfect partnership”, which is a most appropriate title for a new book by former Daily Telegraph northern sports editor, Eddie Giles, who has produced the story of how two of football’s greatest inside-forwards of the 20th century came together for Derby County.

Giles, who started in newspapers with the Derby Evening Telegraph in 1944, was deputy sports editor of the Bristol Evening Post from 1956 to 1970. He is a life member of the NUJ.

This latest book tells how Carter had won the Cup with Sunderland in 1937. Doing the same with Derby County in 1946 made him the only player to achieve that feat either side of the Second World War.

By the time he was 24, he had also won a League title with the Wearsiders and been capped for England.

Doherty also won a championship medal, with Manchester City in 1937, the year after Carter’s Sunderland lifted the title.

After their careers at the Rams, they both achieved promotion from the Third Division North as player-managers, again in successive years.

Carter went on to manage another promoted club (Leeds United) and set another (Mansfield Town) on the way before he took over at Middlesbrough. Doherty achieved wonders in taking Northern Ireland to the 1958 World Cup finals in Sweden.

After coming together as wartime guests for the Rams, they both eventually signed full-time for bargain £6,000 fees (“Derby were lucky to get me for that, and Sunderland were silly to let me go,” Carter told me).

Their signings culminated in FA Cup glory, but then Doherty was gone. Eight months later, after only 15 peacetime League appearances (and seven goals), he was transferred to Huddersfield Town, thanks to a typical own-goal from a Derby board.

Doherty had wanted to take over the licence of a pub near the Baseball Ground. Some Rams directors didn’t like the idea. They thought that his mind wasn’t totally on football.

Never one to hang around when his integrity was being questioned, Doherty demanded a move.

Raich Carter had a happier time at the Baseball Ground. By the time he was allowed to take up the player-assistant manager’s job at Hull in March 1948, the Rams skipper had scored 50 goals in 83 appearances.

Eddie Giles tells the whole fascinating story, not only how Carter and Doherty became entwined with Derby County, but also the before and after, which sets that period into context. As we have come to expect from Giles, it is exhaustingly researched, and although I count myself as something of a Derby County “expert”, there is material here that I have discovered for the first time.

The only disappointment is the reproduction of the photographs. All are familiar and have been published many times before. But in these modern times, there is no excuse for such dreadful quality.

There is also one sad little story. On April 26, 1946, as the Rams were winning the FA Cup final, instead of being there, or at least listening to Raymond Glendenning’s radio commentary, the young Derby Telegraph reporter turned National Serviceman was peeling spuds.

Dallying too long in the mess after the midday meal at RAF Kimbolton in Huntingdonshire, he had left himself vulnerable as a “volunteer” in the cookhouse.

He says: “Ever since, I have been waiting for Derby County to reach another FA Cup final, but, alas, time is now fast running out.” One hopes that Giles still has time for another book or two.

One thought on “Sepia memories of Derby’s perfect partnership”