Falling out of love with football isn’t so rare. In today’s world, where television executives dictate kick-off times and millionaire footballers (how many hundreds of thousand pounds per week?) react to a tackle as if they had been hit by a high-velocity rifle bullet, it is easy to become disillusioned. 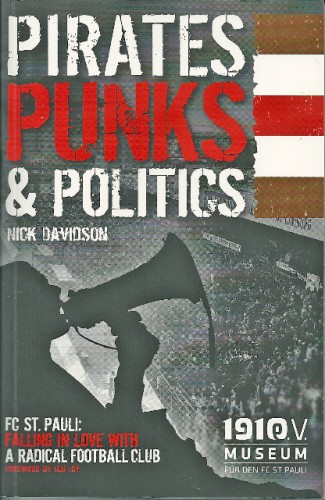 But most disenchanted fans simply stop going. They don’t take the trouble to hop on Eurostar and seek the Beautiful Game elsewhere. Even if they did, on the face of it they would be most unlikely to rediscover their love of football in the red-light district of Hamburg, at a club with a transvestite chairman and terraces populated by punks, pimps and prostitutes.

That’s what Nick Davidson did, recordng his experience in Pirates, Punks and Politics, published by SportsBooks. Davidson fell out of love with his local club, Watford – actually, he fell out of love with English football – and, thanks to political bickering at United Counties League level, even a stint on the committee of a non-League club failed to tempt him back to the game.

He was in danger of spending his Saturday afternoons in a retail park when he read about FC Sankt Pauli, a club run by anarchists, united under the skull-and-crossbones flag.

To an “old-fashioned socialist”, this held particular appeal because, “St Paul fans are staunchly left-wing, fighting against … racism, fascism and homophobia”. Of course, repugnance of such things isn’t just the preserve of the political left. But FC Sankt Pauli’s stance appealed to Davidson. So, one scorching summer’s day in August 2007, he found himself, along with his father who had recovered from cancer, pushing his way on to the terraces at the Millerntor Stadion for a German FA Cup match between St Pauli, then in the German equivalent of the Third Division North, and Bayer Leverkusen.

St Pauli beat their Bundesliga opponents, the party started, and Davidson found his faith in football restored. Thereafter, he journeyed with his new club as it made its own way back to the Bundesliga.

His book goes beyond the lazy stereotype often peddled about this club and instead seeks out the real St Pauli – a club that welcomes with open arms supporters who seek an alternative to the rabid commercialisation of football elsewhere, encouraging them to stay for hours after the final whistle and immerse themselves in a vibrant fan culture.

Davidson’s style and keen observation make this one of the most original books on football that it has been my pleasure to read, another book which otherwise might not had been published were it not for the sturdy imprint run by Randall Northam, the former SJA treasurer.

Davidson has now gone from interested outsider to active member of the club’s fan scene, and all his royalties will be donated to the 1910.V. Museum, FC St Pauli museum project.