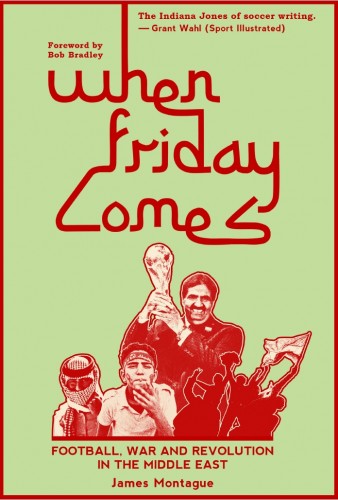 This book is like an airport novel: a slow-burner, with familiar characters entering and exiting the narrative as the main protagonist journeys to many exotic locations, before a climax that brings death and destruction, with the potential of a sequel to come.

Well, another sequel, that is. Because When Friday Comes: Football, War and Revolution in the Middle East is already a follow up to its first edition, which was published in 2008. But a lot has happened in the Middle East since then – most notably the Arab Spring, which cleared out a few dictators and will no doubt introduce a few more, the takeover of some of Europe’s major clubs by oil-rich sheikhs and the awarding of the 2022 World Cup finals to Qatar. Indeed, James Montague might well spend much of the next decade updating it even further.

This is an excellent piece of journalism that will be located on the “Sport” shelves of book shops, but would not be out of place in the “Politics” and “Travel” sections. Montague has gone to places most sensible sports journalists would try to avoid, most political writers would like to leave to foreign correspondents and most travel writers would make sure their aircraft tickets had “day return” printed on them. He went to countries where streets are named not only after their leaders but also after the dates on which they were assassinated.

Montague’s investigation of football in these countries is a brave – or foolish – venture because of the inherent dangers, which include rival supporters being killed and players, on their way to matches, becoming the unintended victims of suicide bombers, or even “executed” while on the pitch.

In a nine-year sojourn, Montague, who has written on football for the New York Times and World Soccer, and was the winner of the best new writer at the 2009 British Sport Book of the Year Awards, visited Yemen, Syria, Iran, Israel, Lebanon, Libya, Palestine, Egypt and many other places which make standing in the Stretford Road end at Old Trafford and shouting “Come on City” a picnic in comparison. He also travelled to the West Asian Championship with the Iraqi football team, a group of players who soon after went on to win the Asian Cup, despite the troubles in their own country.

He meets players (including Ronald De Boer and Marcel Desailly – a rival team in Qatar has someone called Pep Guardiola in their midfield), supporters and politicians, is taken on a shopping trip to buy qat, a drug as common in Yemen as a pint of beer down your local, and chews it with the head of the Yemeni Football Association (I wonder if that’s in Greg Dyke’s in-tray?), gets caught up in a road-rage knife fight, ducks behind cars to avoid gun fire and witnesses the Hillsborough-like struggle of Egyptians as they attempt to get justice for 74 fans killed in the Port Said stadium massacre, a tragedy that has so far led to 21 people being sentenced to death. It is to the 74 that the book is dedicated.

His meeting with a colonel and general in Syria, after taking pictures outside the training ground of Al Jaish, an army team run by the Ministry of Defence, almost has a comedy sketch feel to it, although I’m sure it did not feel that way at the time.

You probably don’t need to read this book to judge whether it was a good idea to take football’s highest-profile competition to Qatar in 2022. For those who are not sure where Qatar is in the Middle East, Montague has inserted a map at the front of the book. Yup, there’s little Qatar, and surrounding it are those bastions of democracy and stability: Saudi Arabia, Bahrain, Iraq and Iran. Add to this a World Cup that could include many of the countries who have intervened militarily in the area over the past few years – and might do so again in the years to come – and you have a potentially explosive scenario. All that and summer temperatures that rarely drop “below 40 degrees”. Book me a ticket now!

The first section on Qatar was researched in 2005, and Montague called its capital, Doha, “a city of monumental dullness”. Let us hope that has changed by the time the England supporters arrive – they don’t do dull very well. It was also “high up on the Foreign Office’s list of places likely to experience a terrorist attack, in one of the most volatile region’s in the world”. The Qatar Tourism Authority, though, calls it “one of the safest places in the world”. But they would say that, wouldn’t they?

Michel Platini, the Uefa president who supported taking the competition to Qatar but wants it played in the winter, and Fifa chief Sepp Blatter obviously know something we don’t about what the region will be like in 2022, although by that time Blatter will be long gone and it is possible the great French midfielder will attempt to re-write history should anything catastrophic happen. At the moment Platini remains unrepentant in his support for Qatar. In a recent, combative interview with the Daily Mail’s Martin Samuel, he said that he would still vote for the Gulf state even if the bidding process was reopened.

Montague, though, remains hopeful that the Qatar World Cup will give a boost to the Middle East.

Like a good novel, this book is a page-turner, which is helped by Montague keeping each section brief (he probably had the material to write a short tome on each country visited). He is let down, though, by the proof reading and the hyphen key on his computer frequently disappearing, but if you can ignore these irritations, this is highly recommended, particularly for those football writers who may well be heading to Qatar in 2022 (or even to the same country for the Confederations Cup a year earlier).