The England and Wales Cricket Board (ECB) is inviting entries from young journalists and regional newspapers for the County Cricket Journalism Awards 2014, supported by The Times.

The awards, now in their fourth year, are designed to recognise outstanding contributions towards the coverage of domestic cricket during the county season.

A new award was introduced last year – the Christopher Martin-Jenkins Young Broadcaster of the Year award – to recognise broadcasting excellence within the domestic county game. 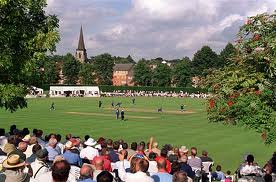 The Young County Journalist of the Year award was also re-named after CMJ – the former BBC Radio Test Match Special commentator and The Times cricket correspondent, who died in 2013.

The Times will also fund the £5,000 scholarship which is awarded to the Young Journalist of the Year to report on an overseas cricket event involving English county teams.

The awards will be made by a panel of cricket writers and broadcasters based on their assessment of the season’s coverage in these categories.

This category is open to any newspaper or online journalist who was under the age of 30 on January 1, 2014. Each entrant is required to submit a maximum of three examples of their coverage of county cricket, preferably including evidence of exclusive stories or original material, which must have been published after January 1, 2014.

Each entrant in this category must also have been under the age of 30 years on January 1, 2014, and is required to submit a maximum of three previous examples of their coverage of county cricket. This can be live commentary or interviews/features or a combination of the two. All must have been broadcast after January 1, 2014.

Regional Newspaper of the Year

This category is open to any daily, evening or weekly regional newspaper in England and Wales. Each entrant in this category is required to submit examples of their newspaper’s coverage of county cricket – a maximum of five articles and all must have been published after January 1, 2014.

Each entrant is also required to supply a short statement of no more than 200 words explaining how the publication expanded or improved its coverage of county cricket in 2014.

Entries can be sent:

· For the Young Broadcaster Award, please email MP3 files to andrew.walpole@ecb.co.uk or send a CD to the below address