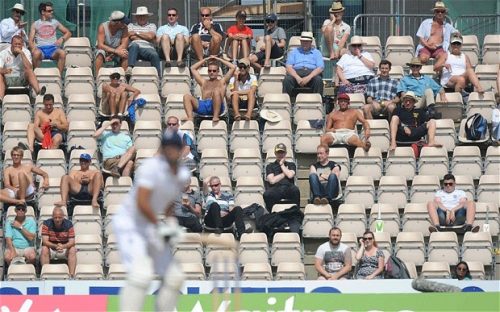 The regional press has “given up” on covering county cricket properly, according to David Hopps, the editor of Cricinfo.

Hopps says that cutbacks have seen coverage of the sport regionally “severely curtailed”.

In an editorial for his site, Hopps said sports journalists are instead to be expected to provide “more flim-flam about where footballers go on their holidays”.

“In the land where the Big Ball bounces, the traditional newspaper sector – with one or two notable exceptions such as The Cricket Paper, thriving after four years – looks on county cricket with indifference,” Hopps wrote.

“First the excuse was ‘no space’. When the web came into being, that shifted to ‘no budget’. When free copy became available, the excuse became ‘no subs’. It would be a savage irony if the newspapers that have long predicted the collapse of county cricket are the first to go.

“The world for a cricket writer in England, beyond the international circuit, is an unforgiving one, and the resilience and talent of those who find a way to survive is deeply impressive.

“The few who remain, and remain entirely independently, continue to provide vital surveillance of the professional game, striving to keep it honest, challenging its decisions – or lack of them.”

Hopps singled out Stuart Rayner, of Newcastle daily paper The Journal, and Steve Cotton of the Bristol Post as typical examples of journalists whose coverage has been reduced significantly this season.

For their coverage of Durham’s county games, The Journal and sister title the Sunday Sun were awarded the Regional Newspaper of the Year honour at December’s annual County Cricket Journalism Awards, run by the England and Wales Cricket Board.

According to Hopps, who began his career in cricket journalism on the Colchester Daily Gazette in 1982, and who later worked a cricket correspondent at the Yorkshire Post followed by a 20-year stint at The Guardian, said that social media could better support the game than newspapers.

“The 18 first-class countries aggregate more than half a million followers on Twitter, even more on Facebook, and the ECB’s @countychamp Twitter feed offers regular video clips, which would have been unimaginable a few years ago.”

He added: “One of the more curious developments in English cricket over the past year has been the construction of a new £2million media centre at Derby. Due for completion by the end of this season, it is expected to come in handy during the 2019 Women’s World Cup, but it does seem rather optimistic for one of England’s less fashionable counties. Derbyshire is the county, after all, where a visiting member of the ECB hierarchy recently wondered aloud why they bothered.

“Good luck to Derbyshire for displaying optimism against all the trends. They may need it. Cricket journalists have been bemoaning the collapse of county coverage for the past 30 years, but every summer does seem to bring a new low.”