Death of a Gentleman is a long, hard quest for the soul of the game. So it is perhaps appropriate that the first voice we hear is that of Rev Andrew Wingfield Digby, one-time chaplain to the England team. 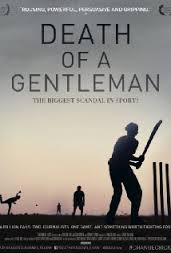 “Test cricket isn’t perfect but it is our imperfect,” says Sam Collins, an English cricket writer who narrates the film. His co-director is self-styled “Australian larrikin”, Jarrod Kimber, an ESPN Cricinfo writer.

Their film does not make easy viewing for those who love the game in all its varieties. They describe it as “a modern day morality tale” which charges that the International Cricket Council, India, England and Australia have effectively taken over the game for their own ends.

Collins and Kimber have raided their contacts book to good effect. We get a wonderful range of opinion from the likes of Ed Cowan, Ian Chappell, Tony Greig, Mark Nicholas, Jonathan Agnew, Michael Holding and others. There is no shortage of testimony from some of the most respected voices in the game. The doyen of Caribbean cricket journalists, Tony Cozier, charges that, “The rest of the world doesn’t care about West Indies cricket.”

They speak to Indian television presenter Harsha Bhogle and to Lord Woolf, who compiled a highly critical report on the governance of the game.

“Does cricket make money to exist, or does it exist to make money?” asks Gideon Haigh.

We also hear a lot from Giles Clarke, who was then the chairman of the England and Wales Cricket Board. Suffice to say, he is a hostile witness.

Even England’s batting collapse at Lord’s in the second Ashes Test this month was less embarrassing than that infamous day that the helicopter landed on the field in front of the pavilion when Allen Stanford and gurning ECB officials posed with £1 million for a “winner takes all match”. In the film, Clarke dismisses this tawdry episode as “… irrelevant. For us, it is history”, and then flatly refuses to answer any questions about it.

Although N Srinivasan , the head of the Indian board, did agree to an interview, his answers were less than enlightening and it took the evidence of a few whistle blowers to establish the true picture of the state of the game on the sub-continent, where the Indian Premier League and Twenty20 has taken such a firm hold.

The film makers do a manful job in trying to unravel the hidden alliances and deals that have informed the development of the sport in the last decade.

Lalit Modi, guru of the IPL promoted cricket and Bollywood in a potent mix. There is no denying that it is supremely well presented, but it is a bit like watching the Harlem Globetrotters play basketball: you enjoy the razzamatazz but when you leave the stadium, can you the recall result? And do you really care?

Later in the film Modi is also seen, somewhat fearful for his own future, living in London after he was ousted from his position in charge of the IPL.

Film-maker Kimber reveals that his accreditation was mysteriously revoked when promotional clips from this film were first posted.

There are further clips from the interview with Giles Clarke. He is seen lecturing our valiant duo that sports administrators are of no interest and that they would be better served concentrating the action on the field.

By such reasoning, no one would ever have bothered to investigate Fifa. How Sepp Blatter would have preferred that option.

By turning the microscope on the workings of the ICC, Collins and Kimber have already rendered cricket a great service. “Don’t pass the buck, do something about it, before it is too late,” is their final plea.