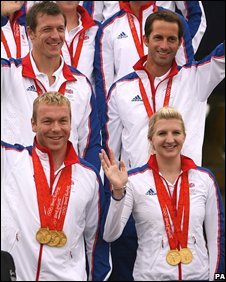 About 500 Olympians and Paralympians are to celebrate their Beijing success in London on October 16.

All athletes who went to Beijing have been invited, with 10 flat-bed trucks to carry them through the streets.

The parade is certain to include several of the leading contenders for this year’s SJA Sportsman, Sportswoman and Team of the Year – voting for which began earlier this week.

The Olympic parade will begin in front of the Mansion House in the City of London at 11am, following a route down Queen Victoria Street and past St Paul’s Cathedral.

The first float is due to arrive in Trafalgar Square at around 12.30am.

Click here for map of the route and more details