Seven days to go, and NORMAN GILLER is running out of fingers to cross as he frets and worries about the short-comings of the London Olympics

A week to go to the “Greatest Show On Earth”, and to this ancient observer on the outside looking in, they appear to be the “Fingers Crossed” Olympics. I am trying hard not to take a moaning, groaning Victor Meldrewish view of the Games, but it is not easy to tap into any mood of optimism.

Fingers crossed the hastily cobbled together security works (already into contingency Plan B). Any disaster on that front and it is no exaggeration to say it could bring down the Government.

Fingers crossed London does not grind to a halt under the torrent of traffic heading for the capital. I was in town on Tuesday and my cabbie (always an accurate barometer) predicted: “It’s going to be chaos. Nobody knows which lane they should be in.”

Fingers crossed the UK Border Agency and the ASLEF train drivers do not carry out their threats to strike, which would cause chaos as hundreds of thousands of people arrive for the start of the Games.

Fingers crossed that Opening Ceremony director Danny Boyle and the Olympic Broadcast Services sort out their artistic differences before the showpiece.

And fingers crossed the anti-doping team can keep one step ahead of the drug cheats. You are very naïve if you think there are not competitors plotting a way around the drug tests.

The BBC this week managed to tuck away (on digital channel BBC4) a compelling Daniel Gordon documentary that showed what can happen when the cheats are literally on the run. Called The Race That Shocked the World, it was about the notorious 100 metres final in the 1988 Seoul Olympics.

Ben Johnson was first across the line, but was glowing like a man who had come unprotected out of a radiation plant and was disqualified after testing positive for anabolic steroids. Six of the eight finalists, including eventual gold medallist Carl Lewis and Britain’s Linford Christie, were in later years implicated for doping offences and, in the case of the Briton, banned for a positive test.

Marion Jones rushed to five golds in Sydney in 2000, and eight years later was jailed for lying to federal investigators, and was exposed as a long-term drugs cheat.

We will never ever know about Flo-Jo, whose sprint records from 1988 still sit at the top of the the Olympic and world record books, unchallenged 24 years later, and 14 years after Griffith-Joyner died under unusual circumstances.

London will be the taking-the-pee Olympics, when more than 5000 urine samples will be taken, beating the record of 3,667 in Beijing.

Perhaps they should allow a free-for-all and give the go-ahead for drugs use. But instead of the athletes taking the medals, they should be presented to their lab technicians.

MICK DENNIS, THE highly respected sportswriter who followed in my path to the Daily Express, has been getting all sorts of abuse for his anti-Olympics attitude. “The true, total cost of the London Games is £17 billion,” Dennis wrote this week on Facebook.

“With eight days to go we still don’t know what they are going to do with the main stadium or the media centre. Funding has been siphoned off from grassroots sports and local facilities, charities are £670 million worse off (and although originally told their Lottery funding would be resumed after the Games, they have now been informed it will be at least a decade after).

“No Games in history has ever increased sports participation in the host country (in Australia it went down, considerably) … I just wish the Games were taking place, as originally expected, in Paris …

“My decade of opposition has led to my being assaulted in a BBC studio and to hate mail and email much more vicious than any I have received about anything else. You are simply not allowed to challenge the orthodoxy.”

The “brand police” protecting the Olympic copyright of health-improving sponsors like McDonald’s and Coca-Cola must be making Games founder Baron de Coubertin spin in his grave. He was always outspoken against professionalism, commercialism and gigantism. All three are now rife in the Games. 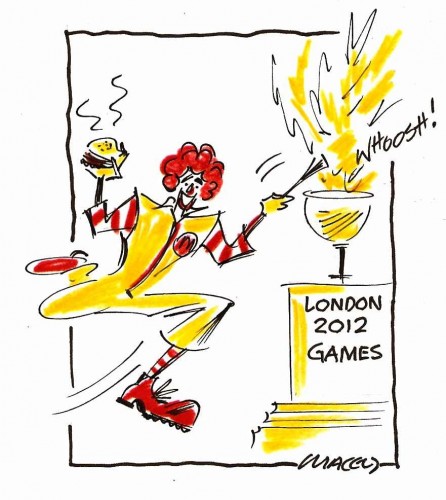 One thing’s for sure, in 50 years’ time nobody will be making a Chariots of Fire-style movie on any of the 2012 athletes. There is not a true-blue amateur among them.

I just hope the likes of scornful critics like Mick Dennis and I can find a way out of our sea of cynicism in which we are in danger of drowning. Fingers crossed.

FORGETTING MY LAST OF the summer whine about the Olympics, the sports fanatic inside me is excited about the festival of sport we are about to witness. But it’s going to take something very special if a British Olympian is to lift the Sportsman of the Year Award.

Andy Murray Wimbledon finalist … Bradley Wiggins likely winner of the Tour de France. The bar is set very high. But I am predicting it will be Mo Farrah collecting the men’s trophy, and Victoria Pendleton the women’s.

And hopefully a special award for Lord Coe, to recognise his masterminding of a successful Olympics. Fingers crossed.

Tip: Get your order in now for a ticket for the SJA British Sports Awards to be staged at an exciting new venue, this year on Thursday, December 6. An announcement is imminent, I understand. They will be harder to get than tickets for the 100 metres final in the Stratford Olympics!

IF I WERE A Daily Telegraph staff journalist I would be having an angry word in the shell-like of their PR spokesperson.

The Telegraph is boasting how they will have a 200-strong editorial team covering the Olympic Games, with supplements coming out every day, special web offerings, apps and all sorts. Their publicity blurb shouts that their contributors will include: Sir Steven Redgrave, Denise Lewis, James Cracknell, Steve Cram, Dame Tanni Grey-Thompson, Ed Moses and Haile Gebrselassie.

Not a staff journalist among them. I wonder how that makes exceptional sportswriters like Paul Hayward and Jacqui Magnay feel?

It seems like only the day before yesterday I was joining in an NUJ-led threat of strike action against non-journalist sportswriters. Actually, it was 50 years ago, and now you cannot pick up the sports section of a newspaper without former competitors filling the columns and or taking the microphone, though you’d rarely see many of these “columnists” working on “their” copy in the press box.