SOCHI SKETCH: It’s been a busy couple of days at the Winter Olympics for the British media pack, as PHILIP BARKER reports

There’s nothing like a British gold medal to get everyone going. Those in the know say Lizzy Yarnold only had to get down the track in one piece on her last run at the Sanki Sliding Centre to win gold. As a devotee of fat ladies singing, I preferred to wait until she’d crossed the line before celebrating.

The majority of the British press watched the decisive run from the Mixed Zone. By far the largest contingent there, they had their own area to await the new champion, thanks to a few timely interventions by the BOA press attaches.

The group pressing forward with their dictaphones included James Toney of Sportsbeat and PA’s Mark Staniforth, who claim to be the only ones who have reported every previous British medal in women’s skeleton, starting with Alex Coomber in 2002.

THE MIXED ZONE at Sanki was more expansive than most at the other venues in Sochi. General opinion is that they have been much too small.

Access to the mixed zone at the finish at the sliding centre was up a very steep staircase which didn’t seem to pay too much attention to concepts of health and safety. Fortunately, the sun shone but it could have been dangerous had the conditions been icy.

Then there was the road to negotiate. Only cones separated the pathway from vehicles whizzing up and down. If you wanted to view the start, this was another trek. It was a welcome to the world of sliding sports that might have been all too literal for comfort for some of our colleagues.

AMY WILLIAMS, the 2010 gold medal-winner, was on hand to do the post-race interviews for the BBC and by the time Yarnold got to the British written press, despite the four-hour time difference between Sochi and London, deadlines were starting to get a little close.

Geraint Hughes of Sky Sports News, probably had the loneliest beat. As non-rights holders, Sky can only operate from “outside the fence”. On a bend in the road outside the venue, he went live with Chef de Mission Mike Hay shortly after 10pm.

The BOA laid on a second session on Saturday afternoon, with Yarnold in the Chekov conference room at the Main Press Centre. In the morning, she’d been listening to her daily fix of The Archers. It’s not yet known whether she agrees that Peggy’s been beastly to Tony… but I digress.

The afternoon session was more of a media huddle with separate groups for daily and Sunday papers and for non-rights holders. As in London 2012, the BOA has a “Managing Victory” team who look after these things. For those who simply couldn’t get enough, she also ran the gauntlet of the Mixed Zone at the medals plaza when she received her gold for a second time, after getting it originally straight after her races; on this occasion she received it today just after 8.30pm local time from Sir Craig Reedie, the former BOA chairman.

As at recent Winter Games, the organisers have made a feature of an evening’s set of medal presentations in the Olympic Park. There’s music and the presentation of all the medals of the previous day, and it attracts big crowds.

SPOTTED, walking almost unnoticed from her athlete accommodation to the Iceberg Skating Palace on Thursday, none other than Yuna Kim, the defending women’s figure skating champion, who is seeking to emulate Sonja Henie and Katarina Witt in winning more than one Olympic gold medal.

Kim is among South Korea’s biggest sporting stars, and usually cannot go anywhere without paparazzo and press attention. Yet here, accompanied by a couple of officials wheeling suitcases with her skating gear, Kim was strolling to her first training session shortly after arriving in Sochi after her 15-hour flight from Seoul without any media attention.

It did not last long. Once she was on the ice, her every move was followed by 10 Korean TV crews.

THE SOUVENIR SHOP at the Main Press Centre has had empty shelves until the last couple of days, and the acme of Olympic collectibles, “pins”, were completely absent.

The pin shortage extends right across the Olympic Park and venues. The Washington Post has described it as “the biggest example of a missed business opportunity”.

“The puzzling lack of pins was the topic of media queries at the International Olympic Committee’s morning briefing for two days running this week, posed with the same gravitas as queries about drug-testing and security measures.”

As many as 1 million Olympic souvenir badges have been made but are stuck in Russian warehouses.

IT TAKES about two hours to get to the mountain media and transport hub at the fabulously named Gorki Press Centre. When you enter the centre, a Russian policeman comes on with what looks like a pricing gun you’d get at a supermarket. Every single journalist on the bus is checked, though the organisers insisted there had been no additional threat to security. Purple is the colour for security here, but on the public trains police in conventional uniforms are checking identity cards and still patrolling every five minutes.

ORGANISERS HAVE claimed that spectators are turning up late and that is why the stadiums appear half empty. I can speak from personal experience that many have been up at the crack of dawn, only to find the train that was due to carry them to Sochi has been cancelled. This means they don’t get the connecting train to the Olympic venues.

Although a brief straw poll among the British revealed that things have settled down accommodation-wise,  Jacquelin Magnay, the former Telegraph Olympics Editor, here for The Australian, reported excessive charging for room extras in the official accommodation. She calculated that this worked out a more than a tenner for a couple of small bottles of water.

Christmas may be over (the Russian Orthodox church celebrates the day on January 7), but the festive spirit continues in Sochi. The breakfast room at the media hotel still has its tree and decorations. Father Christmas is also entertaining the crowds in the public domain of Olympic Park with some singing and dancing routines, Russian style.

JONATHAN EDWARDS, in Sochi for BBC television, has been keeping in trim during his spare time in his hotel gym, which carries this interesting set of rules. Rule 13 is particularly noteworthy: 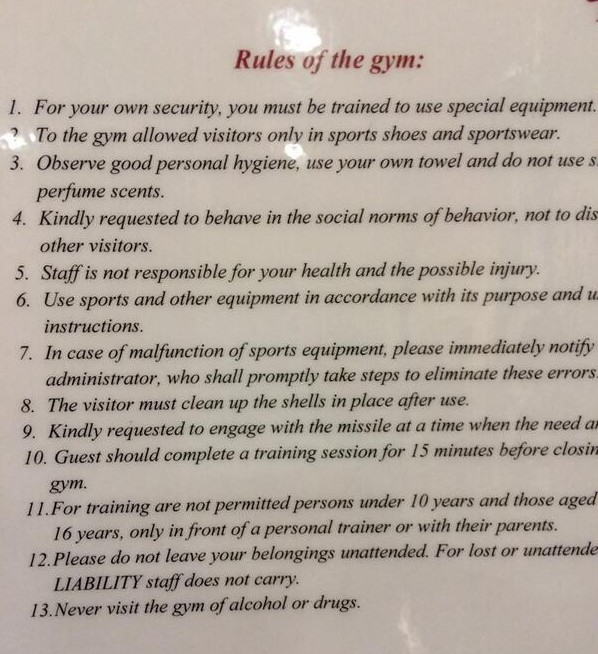