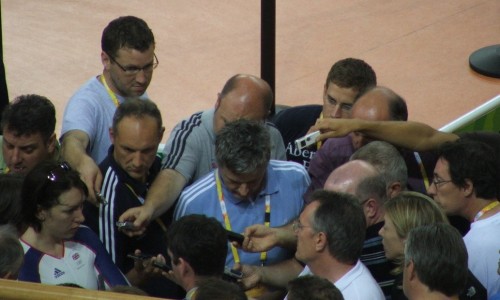 Fully briefed, PHILIP BARKER reports on London 2012 arrangements for the media by the British Olympic Association

The British Olympic Association has unveiled its most ambitious media operation, but its greatest challenge will be managing journalistic expectations at next month’s London Games.

Patience is always a virtue at any major sporting event, for although communication may be instant, getting the right people to the right place certainly takes a lot longer.

As host nation, Great Britain will be under greater media scrutiny than ever before. The British team will number 550, the largest since the first London Games in 1908.

Britain’s medal success could well rival Beijing, so to make sure the “message” gets through, the BOA signed up Darryl Seibel, formerly senior media man with the United States Olympic Committee. Regular Olympic watchers will notice some similarities with the USOC operations at recent Games.

So they have a dedicated “Managing Victory” team; Seibel has brought in Jeff Howard, a veteran of the Americans’ own similar scheme to look after this. As the most successful Olympic nation of all time, they should know how to deal with winning athletes.

For all their flow charts, Seibel and his team are all too aware that such obstacles as doping control could seriously affect timings of post-event interviews and press conference. “It could be an hour , it could be seven hours,” he said. “Managing victory could be executed 50 different ways for 50 different athletes.”

“Managing disappointment” could prove more difficult. Paula Radcliffe felt the full glare of publicity at the Athens Games after her marathon, Tom Daley will be in the spotlight in London whether he strikes gold or not. Many others will endure a similar ordeal.

As in Beijing, there will be a dedicated team to document the progress of every British competitor in every heat. This will be led by former Daily Express sports editor Bill Bradshaw. He described the service as “a parachute” for journalists. Everyone knows what it is like to be stuck in one place when the real drama is unfolding elsewhere. Journalists can sign up for the BOA’s emails and news alerts.

The accredited media accreditation allocation for London, though larger than ever before, could have been filled many times over. So the Team GB House at Westfield in Stratford has been set up on on a more ambitious footing than ever before. Journalists need separate accreditation for access here. They received more than 900 applications. BOA media chiefs have guaranteed that each medallist will pass through their doors, aimed at satisfying UK-based journalists.

Space will be tight at Team GB House. Press conferences will be restricted to 70. Priority will be given to sport specific and journalists from local media with interest in a particular athlete.

For ITV News and Sky this will be a major location. As non-rights holding broadcasters, they can only conduct interviews and film outside the park and other Olympic venues. As in Beijing, the IOC will give a limited number of passes to non-rights holding crews to enter the Olympic Park to film “colour”. The only other exception is non-rights holders can also film press conferences in the Main Press Centre.

Before the Games begin, Team GB’s training camp at Loughborough is offering opportunities for filming during the kitting out process. A mixed zone will be in operation. They are also planning press conferences for all the Olympic sports in both the MPC for Olympic-accredited journalists with a further conference on each sport for non-accredited media at Team GB House.

The BOA will double-up on press conferences with chairman Colin Moynihan and announcements on the flag bearer for the opening and closing ceremonies.

Once the Games begin, television rights-holders – all of them – will have the first post-event interviews with competitors and by the time these are done, particularly at high demand sports such as athletics, the written media may well have been left waiting in the Mixed Zone for more than an hour. With doping control demands also “on the clock”, newspapers and websites may yet again find themselves feeding off scraps.

To try and alleviate matters, the first broadcast interviews with medallists will be broadcast to those in the Mixed Zone and transmitted to work rooms and seats in the press box, in Olympic speak, “the tribune”.

In addition to the BOA’s own efforts, the “Boris Boudoir” will swing into action, with a press centre in Westminster for non-accredited media covering London news, and a similar operation will open in Weymouth for the sailing.

The Main Press Centre, handily placed for hockey and handball in particular, will come alive over the following weeks. Among the attractions, beer and pizza at your desk, a massage service and complimentary tea and coffee. If you do need anything stronger, then the John Rodda and Steve Parry bars – named after distinguished former SJA members and Olympic correspondents at the suggestion of the Association – will be available.

These are set to be the Twitter Games. The IOC and BOA have both issued guidelines for journalists and athletes to follow. For our part, the SJA will be utilising the hashtag #SJA2012 for the Games – so if we have specific Olympic news, or if you wish to attract the attention of our 11,000-plus followers on a relevant story, make sure you use that as a search term.