Sir Craig Reedie, the former chairman of the British Olympic Association and one of the architects of London’s successful bid to stage the 2012 Games, was elected to the influential International Olympic 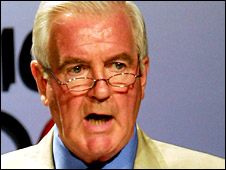 Commitee Executive Board at the IOC Session in Copenhagen this morning.

It marks a sea change for British sporting influence: Sir Craig is the first Briton to be included among the IOC’s powerbrokers for 40 years, since Lord Burghley, the Chariots of Fire era figure who was IOC vice-president. It will provide an auspicious opening on Monday of the BOA’s new headquarters offices on Charlotte Street.

Reedie received his knighthood for his work as chairman of the BOA between 1994 and 2005, when he helped lay the foundations of Londonâ€™s bid, drawing up the blueprint together with the then chief executive Simon Clegg, following three somewhat embarassing British bids for Manchester and Birmingham to stage the Games.

Now on the board of LOCOG, Sir Craig, 68, has been an IOC member for 15 years, after having been the head of badminton’s international federation and securing that sport’s Olympic status. The retired accountant from Glasgow is the first Scot to be elected to the Olympic “cabinet”, where he will work closely with a dozen other senior IOC members and the IOC President, Jacques Rogge, the Belgian who was re-elected this morning for a final four-year term.

â€œI’ve been a member since 1994 and I think I know a bit about it now,â€ Sir Craig told sportsjournalists.co.uk.

â€œIt would be a great honour to end my sports career by serving on the IOC’s executive board,â€ he said.

Reedie narrowly failed in his bid to join the executive board last year but today won through four rounds of voting, beating Pat Hickey, the Irishman who chairs the European Olympic Committee, in the last ballot by 52 votes to 39.

“Thank you colleagues for your declaration of support,” Sir Craig said.

“I look forward to working on the Executive Board, particularly on the build up to the Olympic Games in London.”

on the EB appears to have carried weight.

John Coates, of Australia, won the other available EB seat, as the other candidates who did not progress were Samih Moudallal, of Syria, and CK Wu, the new head of world boxing, from Chinese Taipei.

â€œThere are good relations between the IOC and their host cities, but I think there is a belief that having someone from the host nation on the EB is beneficial,â€ Sir Craig said.

A vote of the IOC membership on whether to add rugby sevens and golf to the sports programme from 2016 is due to be held around 10.30am London time.