As a symbolic leg of the torch relay approaches the 38th parallel in South Korea, PHILIP BARKER looks ahead to the PyeongChang Olympic Winter Games and reports on the changing face of television coverage.

The north didn’t have a single competitor in Sochi in 2014, but the fact that they will be on South Korean soil should ensure the small band of British print journalists heading for PyeongChang will be beefed up by staff from the political desks.

But it is television that will dominate the agenda.  “We will be taking this to the widest possible UK audience,” says BBC Sport supremo Barbara Slater. 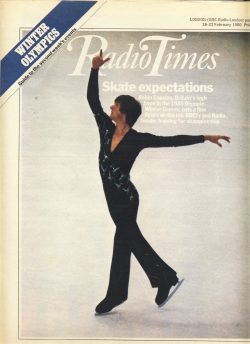 Former SJA broadcaster of the year Clare Balding and highly experienced Hazel Irvine lead the coverage with what they claim will be a “stellar line up of presenters and pundits” including 2010 skeleton champion Amy Williams.

They will also dust down the footage of Williams, Curry, Cousins, Torvill and Dean, the curlers and ‘The Yarnold’ (2014 skeleton champion Lizzy.  Cousins even made the front page of the Radio Times.

The Beeb will offer their product on the network channels, red button, apps, website and social media apps and even virtual reality. Quite an arsenal!

If recent games are anything to go by, they’ll also deploy what looks like a supermarket shopping trolley at the Olympic Park, though without the wobbly wheels.

TV has undoubtedly taken the Winter Games to a wider audience but the influence hasn’t always been completely benevolent.

In 1956 at Cortina D’Ampezzo, final torch bearer Guido Caroli stumbled over an ill-positioned cable. He just about kept the flame alight.

In 1960, the Squaw Valley opening ceremony was organised by Walt Disney and narrated by Walter Cronkite. Except organisers forgot to ask the Greeks to arrange the lighting of a flame in Ancient Olympia.

Swiss journalist Frederic Schlatter wrote sarcastically: “It is infinitely easier to order the sunrise in Walt Disney’s films than to make the sun shine in Olympia in winter.”

There was a flame, kindled from a roaring fire in the Norwegian village of Morgedal, but it was not officially Olympic.

CBS only paid $50,000 for the TV rights in 1960 but colour television and spectacular backdrops to the sport soon made the winter Games an attractive prospect. Even Hollywood was seduced with Robert Redford’s movie Downhill Racer adding glamour.

By 1980, excitement reached fever pitch when the United States of America’s ice hockey kids beat the Soviets in the ‘miracle on ice’ which had implications far beyond the rink.

In 1984 our own SJA President Patrick Collins sent a memorable despatch for the Mail on American coverage. Among other revelations, he reported that  ABC regarded their rehearsal broadcast as war games.

The TV rights battle was also becoming an arms race, $309million paid by ABC for Calgary 1988. Whether Eddie the Eagle and the Jamaican bobsledders constituted value for money, only they will know but ABC have not screened the Olympics since.

The writing was on the wall for the IOC, who made what they called “a revolutionary rule change”, switching winter games to midway between summer games.

“The advantages of changing the cycle with regards to the time and financial commitments of National Olympic Committees preparing for the two events are obvious.”

What they did not say was that television would also be able to spread the rights payments more evenly.

NBC now dominate and after a payment of over $7billion, will do so at least until 2032. In Sochi their hotel was in the Olympic park next to the media centre, and rumoured to have its own Starbucks.

Russian TV ceremonies director Konstantin Ernst admitted: “We designed the opening ceremony for television rather than spectators in the stadium.”

Although the tour de force of classical music and history blew away those of us lucky enough to be in the Fisht Stadium, we also witnessed that famous ring malfunction at the start. Russian viewers did not. Local TV rolled in a pre-recorded sequence from the rehearsal when everything came off perfectly.

As it turned out there were rather more serious deceptions to be revealed.

Superb investigative work by German television journalists at ARD revealed The doping secret, how Russia creates its champions. It showed how samples were tampered with on an industrial scale.

Half of the medals won by Russians have now been taken away and more than 40 team members of their team were disqualified after re-testing.

The official Russian team has been excluded from PyeongChang. Those competitors who can satisfy a special commission that they are without taint will still be allowed to take part using the neutral Olympic flag.

Their country’s tricolour is banned from the uniforms they wear and they will be known as Olympic athletes from Russia or OAR, yet another Olympic acronym for us to remember.

It will be instructive to see how Russian TV commentators explain that to their viewers.

Meanwhile, how about this clip of Olympic Grandstand on the BBC in 1980 to get you in the mood?