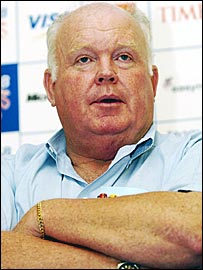 By Ian Cole
Bill Sweetenham used the occasion of the SJA’s first sporting lunch of 2007 to pledge his future to Britain, revealing that he wants to stay on as British Swimming’s performance director and guide the host nation to glory at the 2012 London Olympics.

The sometimes controversial Australian told a lunchtime audience of SJA members and guests at the Olde Cheshire Cheese on Fleet Street how he was excited by the prospect of London staging the Games, and by the young swimming talent that had been unearthed in Britain since he started in his job in late 2000.

He spoke of nine events with British medal chances in the 2008 Beijing Olympics and in next month’s swimming world championships, to be staged in Melbourne. But he has set an ambitious goal of at least one Briton in all 30 swimming finals by the 2012 Games.

“That would be quite something to give the fans around the pool and watching at home someone to cheer in each final,” he said.

“And why not? Britain is developing an outstanding group of young females in the 12-15 age group who we are going to bring through. It’s exciting.

“The men are not as well positioned as we’d like them to be but we’re working on it.”

Sweetenham would not be surprised to learn that his reputation preceded him – certainly among those of us who had never met British swimming’s national performance director.

A couple of hours in the company of the rotund, tough-talking coach changed all that. Here was a fair dinkum Aussie with the best interests of Britain’s sporting success embedded in his heart. There aren’t many of those.

Sweetenham has presided over a revival in British swimming fortunes in his six years in the job. But then a cynic might claim that wasn’t difficult when the GB team drew a stunning blank at the Sydney Olympics.

The revival has come at a cost, however. Sweetenham’s methods have been challenged by some of Britain’s best swimmers and a charge of bullying was levelled at him, which was subsequently disproved.

Sweetenham began our lunch with an off-the-record account of his formative years Down Under in which he left home in dramatic circumstances. His story helped us understand his no-nonsense attitude to some of his charges.

Those charges, he believes, will be in the medal shake-up in Beijing next year and, by London 2012, will reach the astonishing target he has set them.

Sweetenham’s contract runs out after Beijing but he left us in little doubt he wanted to see the job through to London. “Chances are, what I’m doing now is my last throw. I’m pretty much devoted to GB swimming.

“It’s been tough, much harder than I thought. I could have stayed in Australia in the comfort zone where I knew how it operated. But I chose to work in a summer sport in a winter climate with near to no facilities. And I soon came out of my comfort zone.”

Then came the declaration. “Britain is ready. Maybe not next year, but Britain is going to make the breakthrough on the world scene.”

He praised his coaching team, in particular Ian Turner and John Atkinson, and said: “If I ever moved – which I won’t – they are a couple of coaches I’d want to take with me.”

We presented our guest with a Kevin Macey cartoon. It showed Sweetenham supervising a session in the pool, into which he had added a shark. The caption has Sweetenham saying to an onlooker: “Sure it’s a bit cruel, but the shark will get over it!”
How the Australian press picked up on Sweetenham’s lunchtime remarks about Ian Thorpe – click here.