One of the big ticket events for the 2012 London Olympics, the beach volleyball to be staged at Horse Guards Parade in the heart of the city, tonight saw its crucial test event curtailed, as organisers sought to allow spectators to head for their homes before dark.

A statement from the organisers, the London Organising Committee for the Olympic Games, said, “‘LOCOG  decided to bring forward the last three matches – played on the practice court. We feel this is a sensible and pragmatic approach given recent events in London.” 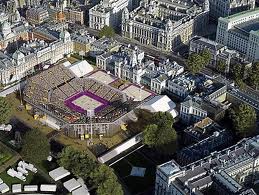 The decision followed the postponement of a number of League Cup matches due to be played in London and Tuesday morning’s announcement that the England v Holland friendly international due to be staged at Wembley tomorrow would be cancelled, mainly because the overstretched Metropolitan Police was unable to guarantee public safety by marshalling football fans while also trying to deal with the rioting that has been going on in the capital since the weekend.

There are some doubts about the opening of the Premier League this weekend – just hours after the FAPL had almost guaranteed games would go ahead outside London, fires and disturbances broke out in Manchester, previously unaffected by the rioting.

Back at Horse Guards – officially the Queen’s front gate from her home at Buckingham Palace – it has been a fortnight since the bulldozers moved in to dump off 2,000 tons on the area where the Guards regiments are normally seen Beating the Retreat.

Yesterday, the media interest at what is expected to be one of the iconic 2012 Olympic venues was mostly photographers and television crews present to see two British teams going through their paces. Shauna Mullin and Zara Dampney will be seeded No1 in the 24-team tournament, but as in most of the interviews they’ve done over the last few weeks, the question of their costumes kept popping up.

“It’s not an issue for us, the costumes are just the same as those in athletics,” Mullin said. “This is the only country where we get asked about them.”

This was the first2012 Olympic test event to require the full accreditation of journalists complete with photo ID. These were issued at the accreditation centre in Earls Court, the process pleasingly swift. In and out in less than five minutes. Here’s hoping this is the case next year too.

The media centre in 2012 will be in St James’s Park, but for the test event accommodation was in a much smaller centre on the parade ground itself.

The media tribune for the test event is in the open air, which says much for LOCOG’s faith in the British weather, though at least good weather was forecast. That will come as a relief to a sell-out crowd as all the other stands are also open to the elements.

As far as possible the six-day tournament will simulate conditions during the Olympics, even down to the way the draw is made. Not quite as simple as it seems, as teams were seeded with pairings from the same country to be kept apart in the six groups of four. Organisers provided a full four pages of notes on how this was to be done.

Come rain or shine the dancers will be there. Introduced in Athens 2004, they were a great success in Beijing, and are considered an integral part of the sport.

“During the dead time when the athletes are not on the court, you want to keep the crowd entertained and try to put new types of entertainment in that work,” said Bob Clarke, the London 2012 volleyball manager.

“Though Hollywood might disagree, this is the entertainment capital of the world and what we want to do it in London is to take it to the next level.”