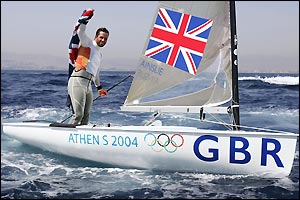 Britain’s sailors savoured a superb finals day of the test regatta in China when they produced their best performance at a multi-classes Olympic event, collecting eight medals.

Ben Ainslie, Paul Goodison, Nick Rogers & Joe Glanfield and Chris Draper & Simon Hiscocks all maintained the lead of their respective Finn, Laser 470 Men and 49er classes, in what was the first use of the new double-points medal race format used at an Olympic venue. Only the top 10 crews from the preliminary rounds go through to the final day’s racing.

Read the rest of Tim Jeffery’s report for the Telegraph from Qingdao, China, here.

Check out British sport’s high achievers in 2006 to make your decision on who to vote for in the SJA Sports Awards by clicking here.

And click here for booking details to attend the SJA Sports Awards on December 13.