Chairman
Beijing, Wednesday: While the British swimming team was making optimistic noises about its prospects with the action in the pool now just two days away, the world’s greatest swimmer, the American Michael Phelps, was trying to play down his considerable medal chances.

They have called the Olympic pool the Ice Cube, a well-named setting for Phelps who tries to remain calm as he tries to win eight gold medals, one more than Mark Spitz in Munich in 1972. Phelps won six golds in Athens, but will not be drawn on what lies ahead.

Spitz never said a great deal either in Munich – as one of those who saw his seven gold medal races, he downplayed so much of what he was doing. But Spitz does predict that Phelps will come thundering into the Beijing waters “and set times that have never been set before”.

Phelps’s coach, Bob Bowman, deals with some of the pressure on him by saying, “It will be difficult to win seven golds, let alone eight. The odds are very much against it, anything can happen.”

â–¡ Mark Foster, who is competing 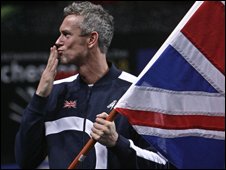 at his fifth Olympic Games at the grand old age (for a swimmer) for 38, will carry the British team’s flag at Friday’s Opening Ceremony.

After rowers (Steve Redgrave and Matthew Pinsent) have carried the flag at the last three Summer Games, Foster – who competes in the 50 metres freestyle – was chosen by a ballot of the team.

There is a strong SJA connection, too: Foster (pictured), a winner of 47 international championship medals but yet to win anything at the Olympics, is the first swimmer to carry the British flag at the Olympics since 1964 in Tokyo, when Anita Lonsbrough, who won gold in the 200m breaststroke in Rome four years before, had the honour. Lonsbrough, of course, went on to become a swimming correspondent and pundit for the Sunday Telegraph and BBC Radio and is an SJA member of long-standing.

â–¡ British distance swimmer David Davies surprised everyone, including an

interpreter, by answering questions at a press conference in Welsh as he talked about facing the 10km open water race for the first time in an Olympics. Welsh broadcast outlets are more than pleased that Davies was able to speak in Welsh. They reckon there are four or five medal chances in the Welsh contingent.

â–¡ I am pleased to report that the British are making their presence felt in the rooftop bar above the Main Press Center where ice cold beer and something called Great Wall Red wine are among the delights.

â–¡ Forget about censorship, Free Tibet protests, air pollution or – shock horror – athletes who might be using drugs. According to some British correspondents, the big story is the heat.

The Telegraph‘s Jim White, thinking ahead to the task awaiting marathon runner Paula Radcliffe, was astonished at his exhaustion after less than 100 yards:

Yesterday morning, I went for a stroll along the stretch of the Great Wall that is not much more than an hour’s drive from the Olympic Park, through the city’s endless suburbs… After about 50 yards of a gentle climb, I began to think I wasn’t going to make it. I was wheezing, sweating, hawking like an espresso machine. After 100 yards, my shirt looked as if I had just been assaulted by a bucket of water. Two hundred and fifty yards on, and I seriously thought I would be obliged to continue on my hands and knees. And, unlike Paula, I was only walking.

Imagine, then, the quandary for those reporters like the BBC’s James Pearce who have to appear on camera. Pearce had to abandon a planned live report because he was sweating too much.

“To be blunt I was in no fit state to broadcast,” reports Pearce on his blog. “If I’d gone on air then terrified viewers around the UK would have been rushing towards their remote controls. I was a mess!” He said he “explained to our bosses back home that ‘technical difficulties’ were making the broadcast impossible”.

“Maybe I just don’t have the right deodorant, but I think the problem is far more fundamental than that. Various solutions have been suggested. One of my colleagues has offered me some potion that he was given by the army in Afghanistan. Apparently once you cover your face with it you get about a quarter of an hour ‘sweat free’.

“That bit sounds fine, but the next bit rather dimmed my enthusiasm. I’m told that once your 15 minutes is up, your face ‘explodes’ with everything that has been covered up before and that your skin can feel numb for hours.”

â–¡ The Opening Ceremony is certain to be spectacular and without breaking any confidences it is certain to include a lot of fireworks before IOC President Jacques Rogge invites President Hui Jintao formally to declare open the Games.

Before Moscow in 1980, such ceremonies were a very small scale affair, basically a parade of flags and a bit of choral singing and dancing. Now, the Opening Ceremony is the hottest ticket in town. That’s probably largely due to the magnificent display in the Lenin Stadium 28 years ago, even though some western nations led by the United States and West Germany boycotted the Games and 18 others refused to carry national flags in protest at the Soviet invasion of Afghanistan.

Only one man marched for Great Britain, who competed under the Olympic flag. Chef de Mission Richard Palmer carried the Olympic flag and it was left to an isolated BBC camera to reveal that to the world, as the Soviet-controlled world TV feed averted its gaze.

Viewers back home were up all night for the Opening Ceremony in LA – a made for TV spectacular which featured a James Bond-style Rocketman, 84 grand pianos playing Rhapsody in Blue and Ed Moses fluffing his lines after bravely committing the athletes’ oath to memory.

Then there was President Ronald Reagan getting the opening declaration in the wrong order.

The Seoul Games began with a procession along the Han River and featured 1936 marathon gold medallist Sohn Kee-chung carrying the flame into the stadium. It was an emotional moment: in 1936, Sohn had been forced to run for Japan.

Seoul was notable as the last time that the Olympic flame was lit in daytime, proof that the Opening Ceremony has become a made-for-TV spectacle. The theatrical lighting in the Montjuic Stadium added to the drama as Antonio Rebollo lit a flaming arrow to light Barcelona’s flame in 1992. King Juan Carlos became the first former Olympic competitor to declare the Games open (he had sailed at the 1972 Olympics).

opening ceremonies. It was a prelude to his fourth of five gold medals.

Sydney set new standards for Opening Ceremonies , a ceremony which evoked the Australian outback and the spirit of reconciliation towards the Aborigines. No matter that the flame rose so very slowly after Cathy Freeman (pictured left) lit the cauldron.

What is China planning? We do know that after the Olympic hymn, that the raising of the Olympic flag will confirm that for the next fortnight this is no longer Beijing, capital city of China, but Olympic soil, and then we’ll have the oath – first spoken in 1920 by the journalist Victor Boin. It now includes a clause on doping.

The lighting of the flame will climax the ceremony: after ascending towers, an archer, Muhammad Ali, a ring of fire and a beacon dipping in salute, what next? The organisers are giving nothing away. As they say in these parts: Welcome to Beijing!

Thanks for additional contributions from Philip Barker