KEIR RADNEDGE, in the French Alps following the latest round of Olympic evaluation, has got an exclusive 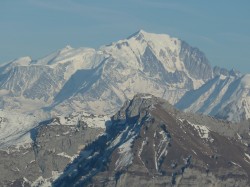 Panic occurred yesterday morning in the picture-postcard village of La Clusaz in the French Alps.

An explanation about local geography being delivered to the International Olympic Committee’s evaluation commission was picked up by the translation units being carried – 100 metres away – by the trailing international media delegation.

The dreaded, awful, untrustworthy members of print, broadcast and internet media were mistakenly being allowed to infiltrate the pure, innocent and undefiled airwave reserved solely for the 11 members of Gunilla Lindberg’s team checking out Annecy’s much-troubled bid to host the 2018 Winter Olympics.

Technicians busied themselves, demanding that journalists turn off the transmitters immediately: “You are not allowed” though one did observe the courtesy of saying later: “I’m sorry, I was only obeying orders.”

It was a piffling incident and not worth mentioning in its own right if it were not for its illustration of the paranoia which the notion of media access – even to the most anodyne and instantly forgettable morsel of information – engenders among international sports bodies.

The incident reminded me of football club press officers who try to tell journalists they cannot ask a manager about certain transfer speculation. David Moyes, the Everton manager was even at it himself last autumn, telling a questioner he should not ask a question about Wayne Rooney before a game against Manchester United.

In this era commanded by the mass media every official can learn how to deliver a non-comittal answer. Journalists understand the reasons. But no journalist worth his or her salt will accept being told (except by his Editor) what he can and cannot ask.

Hide people or information away from journalists and they react like Pavlov’s dogs: they are conditioned to become suspicious. No matter what the sport.

Oh, and as for yesterday’s sensationally exclusive Olympic information: I learned inadvertantly about the number of cows in one particular Alpine valley . . . don’t ask.