FUNERAL DETAILS UPDATE –  Following a priivate family service, there will be a memorial service to celebrate the life of David Meek at St Ann’s Church, St Ann Street, Manchester M2 7LF on Wednesday 21 November at 1.30pm. David’s family have pointed out that his favourite colour was pink, so feel free to wear something with a splash of the colour.

DAVID WALKER, SJA immediate past chairman,  pays tribute to Manchester Evening News legend David Meek, who has died at the age of 88.

He never lost that suave, handsome yet boyish charm – even when his hair turned a whiter shade of pale grey and envious friends asked: “So how old is Meeky?”

David Meek had seemed an indestructible force, an essential element in the Manchester reporting scene for so many decades. His passing today at the age of 88 brought an end to a remarkable life and career that saw him acknowledged as one of an exclusive band privy to the most revealing moments in Manchester United’s history from 1958 to the modern era.

Some might genuinely claim David had the most intimate, long term inside track on events at Old Trafford. After all, his own career and United’s history are entwined by events at Munich Airport on February 6, 1958. 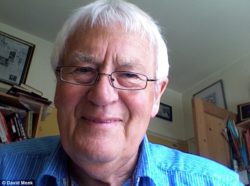 At that point David was a talented, young leader writer who composed thought-provoking columns for the Manchester Evening News (MEN). On that fateful day David was preparing to head home from the office when the news broke of the tragedy on the snowbound Bavarian runway.

Matt Busby’s exciting, young team had won an army of admirers at home and abroad with their thrilling football. The Manchester Evening News saluted United’s passage to the European Cup semi-finals after their victory over Red Star Belgrade. Then, on their journey home, disaster struck.

As well as eight United players and three members of staff, eight journalists also died. One of them was Tom Jackson from the MEN. His death left a huge void which as an emergency appointment David stepped into. It was a job he held for 37 years.

Here was a man who worked on a day-to-day basis with managerial greats – and some not so greats – such as Sir Matt Busby, Wilf McGuinness, Tommy Docherty, Dave Sexton, Ron Atkinson and Sir Alex Ferguson.

So from those emotionally-charged, post-Munich matches, and with Busby fighting for his life in a Munich hospital, David had the task of not only stepping into the popular Jackson’s shoes, but reporting on the roller-coaster that United careered along in 1958.

David had to be sensitive to the memories of the fallen heroes but also recognise the club’s attempts to build a new tomorrow. And, in fairness, he always acknowledged that Sir Matt, in particular, and air disaster survivors like Bobby Charlton and Bill Foulkes, were always deeply scarred by the events of February 6, 1958. Whatever United achieved never washed away their pain from “the crash”.

Busby built a new United. A team that David reported on with some relish as United won the First Division Championship in 1965 and 1967; the FA Cup in 1963 and the European Cup in 1968. In later years we would discuss this golden era when in George Best, Denis Law and Charlton United were the first club to boast three players who had been crowned European Footballer of the Year.

But before anybody thinks David’s life was a bed of roses, reporting on an all-conquering red army, they should remember some sobering facts. For instance, the United glory years weren’t endless. Busby’s last great team grew old and six years after being crowned champions of Europe United were relegated.

During this decline and fall the old, established privilege for the local correspondents of most clubs to be invited to travel with the team to away games was taken away from Meek by United. The Old Trafford hierarchy felt he was too critical. Those who knew David well, including many Old Trafford insiders, accepted his pen was purposeful, not poisonous.

David had to be sensitive to the memories of the fallen heroes but also recognise the club’s attempts to build a new tomorrow. He always acknowledged that Sir Matt and air disaster survivors like Bobby Charlton and Bill Foulkes, were deeply scarred by the events of February 6, 1958

David became a stalwart of the Old Trafford press box. Always immaculately attired, this son of York was very much at home on the Red Rose side of the Pennines. After so many years he appeared part of the very fabric at Old Trafford. After his retirement from frontline reporting duties he acted as a media officer for UEFA so he was still on the scene.

The last time I saw David was in January at the FWA Tribute Night to Pele. We spotted each other across the room, David gave me his usual dignified, royal wave and during a break I joined him for a chat. The event was being held a matter of days before the 60th anniversary of the Munich air disaster. I mentioned how my newspaper were trying to track down a couple of old United faces. David advised on the best way to contact them.

David was older but still happy to help a friend in covering United. He still was beautifully turned out in his dinner suit. His weekend had been a social whirl of events, theatre trips and meeting old friends. He was happy.

We had a follow-up phone call a few days to reflect on life and United issues. We laughed at memories of old, much-missed Manchester reporting legends like John Bean and Ronald Crowther.

And it’s heartening to reflect that if there is a corner in heaven reserved for sports journalists, the inimitable Beano will be scattering salt onto a table top so he can welcome Meeky with a soft-shoe shuffle.

The thoughts of the SJA go out to David’s family and friends. When we know we will post details of his funeral arrangements.