Just 18 months after finally calling it a day as a working journalist, former Daily Star and People cricket correspondent Ted Corbett has died at the age of 82. 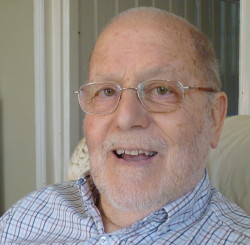 Larger-than-life Corbett’s career started as a tea boy on the Yorkshire Evening Press and finished with him writing columns for The Hindu and Sportstar.

Inbetween he was editor of the armed forces newspaper, Japan News, worked for the Daily Herald, Daily Mirror, Daily Telegraph and Daily Express, before becoming cricket correspondent of the Star in 1982. Corbett also reported on rugby, football, snooker, golf and athletics.

He wrote one novel, The Great Cricket Betting Scandal, which was published in 2000, and several cricket books, including Cricket on the Run: 25 Years of Conflict and the Wisden Book of Test Captains, which he compiled in conjunction with his long-term partner, Joanne King.

In 1989 Corbett and King set up a freelance agency “helped by some good friends and a generous pension plan”.

Cricket Direct reported from the outback in Australia, the back of a swaying and bouncing bus in a dangerous South African township and with rainwater lapping round his knees during a thunderstorm in Zimbabwe.

He recalled last year as he announced his retirement to the SJA: “We had a wonderful time, viewing the wildlife in all 10 of the cricket-playing countries, making friends and never missing a day’s work through illness.

No regrets, although I might have pressed harder to be sports editor at the Star and I was once head-hunted by both the Daily Mail and the News of the World  on the same day

“No regrets, although I might have pressed harder to be sports editor at the Star and I was once head-hunted by both the Daily Mail and the News of the World – on the same day – while I was working in Manchester for the Mirror.

“Now it is time to slip on the fireside slippers and watch the cricket on the telly. I followed England for 300 Tests and 500 one-day internationals and, like Fred Trueman, I am bloody tired after all the effort.

“I might write my autobiography but I suppose that if there is a sports editor desperate to employ a man heading for his century I could open up the laptop again.”

Corbett’s association with The Hindu and Sportstar lasted a quarter of a century before he was told, at the age of 80, that his services were no longer required.

“To tell the truth I am not distressed by this dismissal,” he said at the time. “I tried to quit papers seven years ago.”

Corbett’s  funeral is at noon on Wednesday August 30 in Ramsey, Cambridgeshire. Contact Jo King on corbett.ted@gmail.com for further details.