By Steven Downes, SJA Secretary
Saturday nights will never be the same again.

ITV airs the very last Parkinson chat show this weekend, as the SJA President Michael Parkinson brings down the curtain on a 36-year reign as the king of the chatshow hosts. 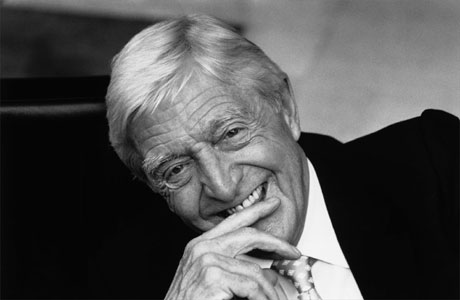 Dame Edna Everage, David Beckham, Peter Kay, Dame Judi Dench, Billy Connolly and Sir Michael Caine are among the illustrious guests who will help the much admired presenter celebrate the end of an era on Sunday night, Dec 16, at 9pm.

There is one further programme, a compilation of some of the highlights of Parky’s many years as a Saturday night television fixture (extraordinarily, the BBC wiped many of the early shows, including irrecoverable interviews

with the likes of John Lennon) still to come just before Christmas. But tonight’s show draws a line under a remarkable career.

The last full chat show, recorded in London at the end of November, was completed despite Parkinson suffering severe discomfort from back pain. The emotions of the occasion were also difficult for the man, widely acknowledged as the finest television interviewer of the past quarter-century on this side of the Atlantic.

The Parkinson shows, with the iconic jazz signature tune, began on BBC1 in 1971, bringing a touch of American style blended with Parkinson’s own journalistic nous and Yorkshire commonsense, was soon established with Match of the Day and a Saturday movie as a must-watch fixture at the weekend. Parkinson’s passion for sport saw him frequently turn to top footballers, boxers and other athletes for guests slots – Muhammad Ali, George Best and Geoffrey Boycott being among the most memorable.

But as well as sparring with Ali, Parkinson was always prepared to go a few rounds with Rod Hull’s emu, too.

For some of his biggest fans, the shows in the later years were perhaps more about the cult of celebrity than the more edgy programmes of the earlier, BBC days. Appearances by the likes of Kenneth Williams and Peter Ustinov, Les Dawson, Bob Boothby and Edith Evans, or Stephane Grapelli jamming with Yehudi Menuhin, Peter Cook and Dudley Moore, and Peter Sellars were among the highlights, while the programme always delivered its share of Hollywood superstars including Lauren Bacall, Robert Mitchum, Shirley Maclaine, Bette Davis and George Burns.

There were never too many guests in any one show, the guests were never rushed, and Parkinson – unlike some of his more modern counterparts as chat show hosts – ensured that the viewers heard more from his guests than they did from him.

In the late 1990s, when I worked (in a lowly capacity) with John Inverdale on the sadly too short-lived sports chat show, On Side, Parkinson – at that time out of favour and off-air at the BBC – was regarded as the benchmark for what we aspired to achieve: Inverdale, as host, laboured intensively over his research to ensure he was briefed intimately about his subjects; programme editor Philip Bernie had to try to resist temptation to add too many, rather than too few, guests into each programme; and the pattern of starting a show with a big-name guest to engage the audience from the beginning was also an essential element.

It can only be hoped that the talent spotters at the networks uncover another interviewer as skilled as Parkinson. Trouble is, they may never disciver his like again.

â€œAfter three enjoyable and productive years at ITV, and after 25 years of doing my talk show I have decided that this forthcoming series will be my last,â€ Parkinson said when announcing his intention to retire.

â€œIâ€™m going to take next year off to write my autobiography and consider other television projects.”

The SJA wishes its President, and his wife, Mary, all the best for an enjoyable retirement, and we trust Parky will continue to play a full and active role in the Association’s activities, especially in the coming 60th anniversary year.