Agence France Presse sports reporter PIRATE IRWIN has branched out into writing historical thrillers. Here, he outlines the background to his latest book

“Don’t bite the hand that feeds you”, they say, so you might think that writing a historical thriller about a murder in Vichy France during some of the darkest days of French history would not endear me to some at the august press agency in Paris where I have worked for nearly 20 years. 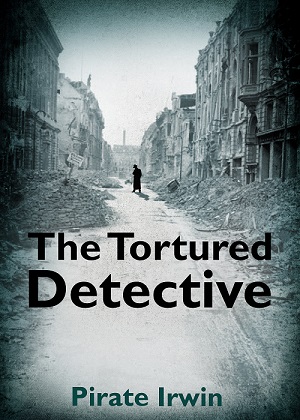 Having been intrigued by history, especially the Second World War, I’ve always wanted to combine writing about sport with having another outlet for my more creative writing. Having seen numerous references to Napoleon and Marshal Ney struck from my copy by the subs on the AFP sports desk, I realised there was only one avenue to go down if I wished to enjoy the fruits of a sports journalist for longer, and that was to write thrillers on the side.

I love the moral conundrums that history can throw up. In sport, it might be “should I take drugs because everyone else is?” or “shall I hack him down because if not he will score?”. In my first book The Twisted Patriot (Yehkri Publications), I tackled the moral choice of choosing life over death presented to the Flashamanesque hero Sebastian Stuart, even if it meant betraying one’s country.

A similar question sprang to mind for The Tortured Detective (Endeavour Press). Setting it in the days of occupied France with the collaboration of the remnants of a state, in the country that from the time of the Revolution proudly espoused the high ideals of “liberty, equality and fraternity”,  but which foresook them once the Nazis came calling.

From an early age I remember people tut-tutting and saying the French behaviour was appalling and it would never have happened in England or Ireland, where I was born and brought up. That’s only easy to say when you haven’t been occupied by one of the most abhorrent regimes to have disgraced the world.

For every Winston Churchill or General de Gaulle, there is a Marshal Petain, one who had covered himself in honour and glory in the previous war and who decided that he would back the winner and at the same time preserve some identity with a state run by Frenchmen.

Of course there is always a heavy price to be paid for supping with the devil, and this Faustian pact cost France much more than just a life, it cost it its reputation for decades after they openly connived in rounding up the Jews, even children that the Nazis had not asked them to do, and perpetrating other heinous crimes against their own people.

It is into this morass of amorality that my hero Gaston Lafarge is plunged in the middle of the Occupation with the murder of the starlet Marguerite Suchet and very soon is pitted against his bete noir from before the war and now uncomfortably for him his boss, Rene Bousquet.

Bousquet is everything Lafarge detests. At first, you might think it is borne out of jealousy, as Bousquet prospered while Lafarge rotted away in a Prisoner of War camp following the abject collapse of the French army as well as the Briitish Expeditionary Force. Bousquet is a highly intelligent and capable technocrat and a man of some courage as had been evidenced from before the war, but whose over-weening ambition led him to forsake the moral route and thrown in his lot with the Vichy State and the Nazis.

Bousquet, more than others in the Vichy camp, always fascinated me as young, bright and debonair: he could have been a shining light in post-war France had he taken the route of supporting de Gaulle. However, the book is about much more than just Bousquet. There are the good and the bad, the moral choices that everyone had to make in those extremely difficult times, no one more so than Lafarge himself.

Hence why the remark made by Francois Mitterand is so apt and cannot be disputed unless one has had to live in such times: “There is no black or white. There is only grey”.

I do not pretend that The Tortured Detective is a definitive portrait of those times in France, but I wanted to portray what it could have been like for someone who worked for the state apparatus, in this case the police, and still go about their business and feel that they were not contributing to the crimes of the people they were working for. That they could investigate ordinary crime while their bosses plotted crimes that would stain the history of the proud country for decades to come… and also plot their downfall.

Is Lafarge successful? That is for the reader to find out, but I hope in some small way to have brought to life a period of history which the French, for different reasons, would prefer to have buried in the past.