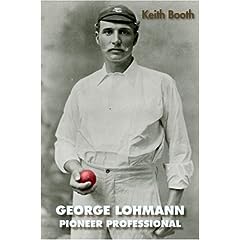 The chairman of the judging panel, Eric Midwinter, said that the book is “a lovingly told and scholarly account of one of cricketâ€™s greats”. Booth’s book saw off competition from another prominent figure at The Oval, former prime minister Sir John Major’s More Than a Game: The Story of Cricket’s Early Years.

The Cricket Society said: “George Lohmann’s county and test record would be worthy of a full biography but this book also looks to overturn conventional views on the merits of professional players and their place in the game.”

A Yorkshireman by birth, Booth has completed 12 seasons as scorer to Surrey. During that time he has developed an interest in the clubâ€™s early history and Lohmann follows Edward Pooley and Charles Alcock into his canon of 19th century biography.

Formerly in university administration, Keith is joined in his second career as a scorer/author by his wife Jennifer, formerly archivist of the Tate Gallery and now scorer to Surreyâ€™s 2nd XI, who does much of the detailed research for his books.

Booth’s The Father of Modern Sport: The Life and Times of Charles W Alcock was short-listed for the Cricket Societyâ€™s Book of the Year Award for 2002.

This year, the Cricket Society judges said of the Lohmann book that it is “one of the few books to examine the career of a Victorian cricketer, this picture of a life, full of incident and eventually to be cruelly cut short, illustrates a period in English cricket where the professional cricketer was a hired hand and reflected the class structure of society at the time.”