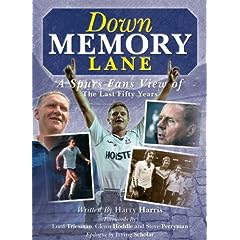 The prolific Harry Harris publishes his 60th book next month, but Down Memory Lane promises to be far more personal than its 59 predecessors as the former Mirror and Express football reporter delves into his own memories of his true passion: Tottenham Hotspur.

Down Memory Lane gives a fanâ€™s view of life as a Spurs supporter for 50 years, aided with the benefit of Harris’s professional access to the players, managers and personalities behind the scenes.

Harris has been so influential within White Hart Lane that he has advised and influenced many a Spurs chairman, including Sir Alan Sugar and Irving Scholar. In his book, Harris reveals the remarkable and sensational behind-the-scenes secrets of takeovers and player transfers.

Harris says: “This book is a must for all Spurs fans who have followed the club since the glory, glory days of the 1960s, and for those who want to know what really made Bill Nicholson tick.

Harris’s publishers are planning a grand launch for the book later this week, with a signing at HMV Oxford Circus at midday on February 25. Former Tottenham players Ossie Ardiles and Paul Miller will be attending.

Although the book is not officially out until March 2 – the day after Spurs meet Manchester United in the League Cup final – pre-orders on Amazon already put it at No4 in the sports biography charts and No8 in overall football books.

Down Memory Lane â€“ A Spurs Fanâ€™s View of the Last Fifty Years by Harry Harris is published by Green Umbrella Publishing at Â£18.99.