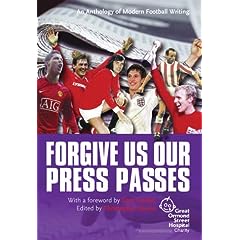 It is the title of the autobiography that Frank McGhee never wrote.

For years, the Daily Mirrorâ€™s Voice of Sport promised that when his life story was published, it would be called Forgive Us Our Press Passes. Alas, McGhee died in 2000, his book still unwritten. But if he is now looking down from that press room in the sky, he might be pleased to know that a book of that title has been published, and for a very worthy cause, too.

Edited by former Telegraph football man Christopher Davies, who published his own

story, Behind The Back Page: The Adventures Of A Sports Writer, earlier this year, Forgive Us Our Press Passes is a collection of original articles contributed by around 70 leading members of the Football Writersâ€™ Association. Proceeds are going to the Great Ormond Street Hospital for Sick Children, and three cheers for that.

Some of the subjects are contemporary, some historical. They range from the joys of watching Barnet on a freezing winterâ€™s evening to why England canâ€™t take penalties.

I enjoyed them all, particularly Barclayâ€™s essay summing up why football has outgrown its fans, Collins on the ordinary people who love Charlton Athletic, and Lacey on the changing face of the game. He paints one particularly wonderful picture of a character at Millwallâ€™s old Den, 50 years ago: â€œA small, wizened man, wearing an old army greatcoat and clutching a battered toy lion, used to sit within earshot of Millwallâ€™s directorsâ€™ box and hurl abuse at its occupants until, inevitably, he was thrown out. But he was always there next time.â€

Forgive Us Our Press Passes is a seam full of rich nuggets, from the achievements of Sir Alex Ferguson to those of Hartlepool United. Theyâ€™ve even got Gary Lineker to pick his best-ever team from the recipients of the FWAâ€™s Footballer of the Year Trophy (no room for Matthews or Finney, by the way).

As Davies says in his introduction, there has literally never been a book like it.