Thanks to a member of the Sports Journalists’ Association, Derby County yesterday unveiled a memorial to players from the club who were killed during World War I. 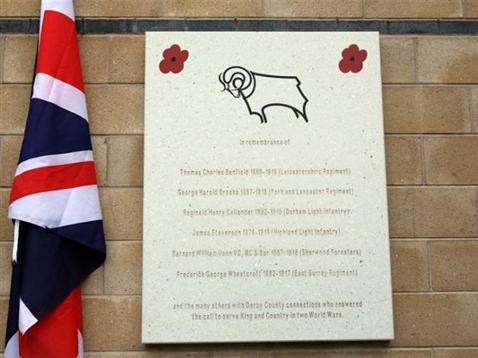 A couple of months ago, long-time Derby supporter, Ken Wilson, wrote to Derby-based freelance Anton Rippon to ask if he would put his weight behind a war memorial for fallen Rams players.

Rippon, who writes a Saturday football column for the Derby Telegraph, duly obliged and the club’s chief executive, John Vicars, spoke with Garry McBride of Evans Concrete, one of Derby’s sponsors, who offered to cast a memorial to be sited at the iPro Stadium.

Rippon said: “The club read my piece and within a couple of hours of it appearing, plans were in place. The whole thing caught the imagination. Local media including the Derby Telegraph, BBC Radio Derby, and BBC East Midlands covered the actual casting of the plaque and there has been ongoing publicity.”

John Vicars said: “We’re grateful to Ken Wilson for suggesting the idea and to Anton Rippon for promoting it in his column; and, of course, to Garry McBride of Evans Concrete for readily agreeing to cover the whole project.”

The 5ft x 4ft cast concrete plaque in white Spanish dolomite complete with two red poppies and the Ram logo was unveiled before the televised game between Derby and Wolves.

It will bear the names of six players known to have perished in the Great War and also remember “the many others with Derby County connections who answered the call to serve King and Country during two world wars”.

“It’s been a privilege to have a hand in this and gratifying to know that something I wrote has had such a positive end,” Rippon said.

TREVOR FRECKNALL: Proud of work that ensured we remember them