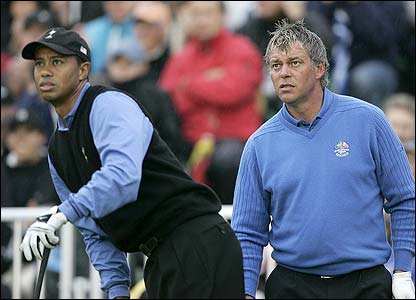 By Ian Stafford
The Ryder Cup had just about every ingredient imaginable to make it a fantastic sporting event to cover. From a British journalist’s point of view, a European win made life easier, but it was the nature of the win that transformed it into one of the best sports stories of the year.

We knew the atmosphere and the crowd would be good but nobody imagined the galleries to be that large, that passionate, yet fair-minded and respectful. We expected the two sets of golfers to be competitive but sporting, yet it has been a long time since we have witnessed such friendship and camaraderie between 24 sportsmen intent on beating each other.

And we always glean some emotion out of an event such as the Ryder Cup. But the Darren Clarke story, with an all-round, three-day performance of exceptional heights, and a first ever singles win on that final, remarkable day, resulted in no dry eye on the course nor in the media centre. It was yet another example of how sport transcends the boundaries to create such a compelling, human-interest story.

It seems to me that covering golf, as I do on occasions, compares extremely favourably to other sports. I followed the Clarke and Westwood versus Woods and Furyk Saturday morning foursomes. Wearing my media bib I was privileged at all times to be just a few yards away from the golfers, allowing me to examine their expressions and reactions to the highs and lows of golf. It was the equivalent of standing by the referee as Frank Lampard takes a penalty for England, or at square leg at Lord’s jumping out of the way of a Kevin Pietersen leg-side clip.

You also tend to be in privileged company inside the ropes at a major or the Ryder Cup. For much of the Saturday morning match Elin Nordegren (Tiger Woodsâ€™s wife) and Melissa Lehman (US captain Tom Lehman’s wife) sat by, while Lee Westwood’s wife, Laurae, often lent me her spare umbrella during the frequent and heavy Irish showers. 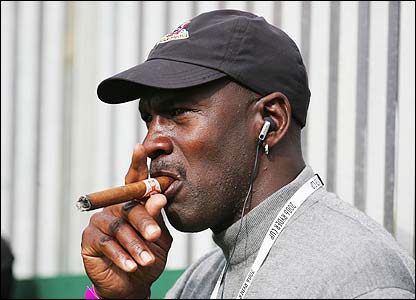 Former US President George Bush senior drove along nearby in his buggy, while Michael Jordan strode purposefully supporting his friend, Woods. At 6 ft 6in, smoking a cigar the size of Cuba, and donning a bright, yellow jacket, “His Airnessâ€ was hardly keeping a low profile. There was a time when I would have killed for a Jordan interview. Now he was holding his umbrella over my and other journalistsâ€™ heads, swapping jokes and comments about the state of play.

Inside the media centre the press and communications department did us proud, as usual. The working area was large enough to accommodate the 2000 journalists present, and every golfer was made available after each match or at the close of play for a press conference. Transcripts of these conferences, for those too busy to attend or who were enjoying the fine catering facilities at the media centre, were delivered warm and fresh within 20 minutes of the conference ending.

The large scoreboard and two, huge TV screens kept us completely up to date and the press pack (scorecards, player profiles etc) came in extremely useful.

Just about the only pain was the time it took to get into the K Club, situated in the middle of nowhere beside Straffan village in County Kildare. Under the circumstances, and clearly security was heightened, the organisers did their best, laying on a fleet of media buses that drove us back to the two main media hotels, but the journey still took often 45 minutes.

At least it gave us time to re-live the state of play and plan the evening ahead. If the next Ryder Cup, in 2008 at Valhalla in Louisville, Kentucky, is half as good as the 2006 at the K Club, then you can count me and no doubt countless others in for another three-day ride of emotion, passion and outstanding sporting achievement.

The Ryder Cup was clearly one of 2006’s sporting highlights. SJA members can vote for the Sportsman, Sportswoman and Team of the Year – and there have been several outstanding candidates: