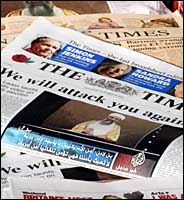 here on a half-century of sports reporting that included the 1966 World Cup, the Munich Olympic Massacre, Ali’s greatest fights, and more Olympic golds even than Steve Redgrave

Desperate to pay off college debts at Peterhouse, Cambridge, and having contributed to Varsity, the undergraduate weekly, and aborted the intention of becoming a teacher of organic chemistry, I applied to several national newspapers, provoking the standard “don’t call us, we’ll call you”. Then Roger Malone, later a television presenter, suddenly quit The Times for the Express, vacating his temporary post of summer relief sub-editor. A door opened, the sports editor beckoned: exclusive responsibility for producing up to daily first-class cricket scoreboards in full. Boring but an exacting journalistic training.

There was a sports staff of only seven including John Hennesey, the sports editor, to produce what on some quiet winter days was no more than four broadsheet columns. There were some distinguished correspondents: John Woodcock, lauded cricket writer; Richard Hill on tennis; Peter Ryde, literary promoter of the Augusta Masters whose benign prose began my love of golf; the inimitable OL “Ginger” Owen, triple sage on rugby, boxing and athletics, shortly succeeded on the latter two by young Neil Allen; and the legendary Geoffrey Green, Corinthian centre-half said by Charles Buchan to have been the best in England, professional or amateur.

Home was the private Printing House Square, where I would squeeze my Morris eight ’32 two-seater tourer alongside the Rolls of Sir William Haley, austere editor. PHS was a maze of dark corridors, high-ceilinged Victorian rooms with open coke fires, and afternoon tea, cream buns optional, ordered from and delivered on a tray by Edna, a matronly East End angel with lace pinafore and headpiece.

“Just in time for breakfast, Mr Green”, she would say, as our football correspondent bowled in, still attired in DJ from the previous evening’s engagement.

Soon I began to double, on days off and Saturdays, as “A Staff Reporter”: no bylines, two guineas for a London match and ten shillings (50p) expenses; four guineas and a guinea out of town, with two o’clock kick-offs midweek because there were no floodlights. “Have they a future?” questioned the FA Yearbook.

Copy for Saturday reports had to be hand-delivered on Sunday. If you lived out of town, it was sent by special rail package, to be collected by messenger from a mainline terminal. There was a single telephone copytaker on Sunday, for that day’s events, a venerable Tom Wordsworth, 75 and part-deaf. So I once had an Oxford University centre forward, who was reading philosophy, appear in the paper as studying velocity.

I slid into a permanent subbing position when Uel Titley – so christened by a father irate at being addressed by the abbreviated “Sam” – succeeded Owen as rugby correspondent.

Abandoning ambitions on the field at 23 – I missed a sitter for an England XI against QPR and was the only player not selected against Scotland at Wembley the following Saturday – I applied in 1958 to the Manchester Guardian, after what seemed a respectful delay of several weeks or so, for “any possible vacancy”, without referring to the untimely death of Don Davies, “Old International”, at the Munich crash. The polite reply was that “opportunities such as that a while ago” were swiftly filled. At the Express, I learnt some years later, there had been an application on the sports editor’s desk for Henry Rose’s job the morning following the crash.

For my holiday in 1958, I freelanced for The Times at the World Cup in Sweden: six matches involving Scotland, Wales and Northern Ireland, at six guineas a time, no expenses, budget 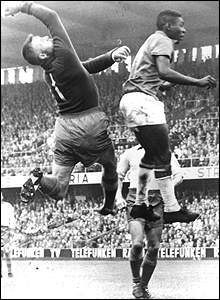 cost for three-week round trip £50 (picture left shows Pele in action for Brazil in his first World Cup). My wife came too, the weather was fabulous, and we existed largely on milk and biscuits. Ringing reverse charge to enquire whether the paper might like a preview of injury-hit Ireland’s play-off against Czechoslovakia, the sports editor yelled “You’re costing us money, get off the line.”

In 1960, with altruistic intervention from Jim Swanton, I joined the Daily Telegraph, though with the embarrassment of having no job title. The sports editor was veteran Frank Coles, seldom sober after lunch, and renowned for having exhausted, in company with boxing correspondent Lainson Wood, at the Helsinki Olympics substantial funds left on deposit with a Finnish bank during World War II.

My salvation arrived in the shape of the threatened PFA strike, led by chairman Jimmy Hill, and the new Sunday Telegraph in 1961. Detailed to cover for the daily the long-running strike action – which was regarded as an irresponsible nuisance by most of the leading columnists – I supported the players, and my editorial gamble encouraged Roger Wright, benign sports editor of the new Sunday paper, to chance his arm with a youngster as football correspondent, alongside City specialist Nigel Lawson and man-in-the-saddle John Lawrence.

The Telegraph management opportunely retained me midweek on the daily while paying me a princely £400 pa for my Sunday responsibility. Which meant that in 1966 I reported the World Cup final, 2,000 words on the whistle after extra time, for £6, pro-rata. Football was not then the obsession it is today. Covering the 1962 World Cup in Chile, I cabled the office for wordage on a final preview, receiving the response: “World Cup now dead, send 400”. I cabled back: “Neither I nor World Cup dead, sending 800.” It was all printed.

Communication from South America was a journalistic nightmare, eight hours behind London and with local telex operators often going off duty at 8pm, when you needed to file stories overnight. When Bobby Moore was arrested in Bogata in 1970 – never mind that the Colombian police knew from the outset that his fingerprints were not on the jewellery cabinet from which the bracelet was removed – I was the only London-based correspondent present, the rest having continued with the team to Mexico, and was incompetently pounding out two-fingered on the hotel telex machine at 6am.

The previous year, on England’s preparatory South American tour, I was room-sharing with Hugh McIlvanney, and awoke in the middle of the night to hear that text-perfectionist on the telephone to the Observer with corrections, at £6 a minute, saying: “In paragraph 23, the comma in the second sentence should be a semi-colon!”

In 1972, the world scoop of my career went unpublished on the

night of the Munich Olympics massacre (picture right). At 8am, hearing the early news, I had entered the Athletes’ Village by scrambling under the perimeter fence, and spent the day gathering reaction to the tragedy; co-incidentally being given the unbelievably myopic quote by the BOA chef de mission: “As far as the British are concerned, security here is very good.”

At a quarter to midnight, the hostages and terrorists having been flown to the military airport, official silence surrounded the rumour that the hostages had been released. From a deserted Organising Committee press office, a lone, scared secretary told me there was “still some fighting at the airport”. In an instant I knew that at least some hostages must be dead. I called the night news desk. Because I had no official quote to support my categoric hunch, the paper ran with agency reports and led the morning edition with “Hostages Saved”.

In 1973, breaking Fleet Street convention, I moved down-market to the Express, succeeding Desmond “Brown Bowler” Hackett, and joining such esteemed colleagues as Peter O’Sullevan and Clive Graham on racing, Crawford White (cricket), Frank Rostron, South African
Olympic boxer in 1932 (tennis), Pat Marshall (rugby) and Ronnie Heager (golf). Over nine years of often crazily fluctuating editorial policy, as circulation plummeted from more than 4 million, I survived six changes of editor, and often open warfare between London and Manchester editions which could exceed even rivalry with the Mail.

Travelling to Liverpool specially for a European Cup tie, I would find every lamp-post on Merseyside bearing the placard “Alan Thompson is here”, though Tommo and I remained personally on good terms. For Celtic’s final in Lisbon, the Express group â€“ Daily, Sunday, Scotland and Evening Standard â€“ sent 27 people. Everyone was there bar the commissionaire. The year’s signed-pay-chit taxi account in Fleet Street was said to be over Â£700,000. No wonder the Beaverbrook empire blanched financially.

When I told Christopher Ward, last of my editors, that I was leaving for The Times, he burst into tears, begged me to allow him 24 hours to find a solution for my remaining, and I never heard another word.

The Times‘ world-wide reputation was still then revered: for its accuracy, for the breadth and experience of its foreign staff, for its letters page, obituaries and legal coverage. I gladly took a 20 per cent drop in salary, though editor Charles Douglas-Home generously said my expenses should when appropriate include such essentials as a new set of wine glasses. Sad to say, he died, and I never claimed the glasses, but I spent 15 absorbing years covering a kaleidoscope of international sport under two of the wisest of sports editors, Norman Fox and then Tom Clarke, the latter’s galloping enthusiasm so infectious.

My brief ranged from Tyson to Redgrave, Francois Pienaar to Maradona, from Seb Coe to Viv Richards, Boris Becker to Dennis Conner and Peter Blake. I was relieved to have taken my pension by the time Murdoch’s front-page cover would carry, as second lead, that Gabby Logan had given birth.

This is an abridged version of an article that appears in the latest issue of the SJA Newsletter, available exclusively to members of the Sports Journalists’ Association. Click here to join