We’re on the homeward run now in the end-of-year SJA prize quiz, which is offering £100-worth of prizes available to the best and quickest three entries.

There are another set of questions each day between now and New Year’s Eve, when you’ll also get details of how to enter. Here’s your next 10 questions:

51, Name the Olympic steeplechase gold medal-winner who went on to become a Fleet Street sports editor. 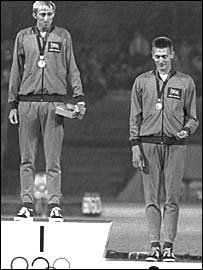 53, In which city will the 2008 Olympics equestrian events be staged?

54, Who played in goal for Aston Villa when they won the European Cup final in 1982?

55, Picture question: David Hemery won the 400m hurdles gold at the 1968 Olympic Games. Who was third?

56, What has been the best Great Britain women’s Olympic hockey placing?

57, Name the sports commentator who, in 1949, was the only non-international runner ever to win the Manchester Mile.

58, Who are the reigning Olympic champions at… tug of war?

59, What was unusual about the abandonment of the third Ashes Test at Headingley in 1975?

60, Who were the last English club to beat Real Madrid in a European cup final?

Another set of questions tomorrow.