Journalists working on local newspapers across the country will have regarded the latest announcement from Trinity Mirror with some trepidation. The country’s biggest owners of regionals and their accompanying websites has decided to abandon completely the production of newspapers in Berkshire – and to shut down other free papers in Surrey – in favour of a “bold digital-only publishing transformation”. 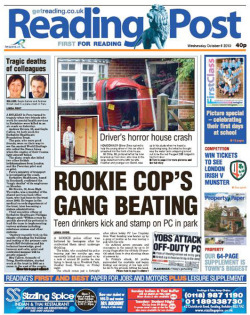 Twenty-six jobs – including 17 in editorial – will go in Berkshire and a further 24 editorial and commercial jobs elsewhere.

It said that 12 digital jobs – 10 editorial roles and two commercial – would be created.

Newsrooms across Trinity Mirror’s West London titles in Uxbridge, Ealing and Hounslow will be restructured to boost traffic to getwestlondon.co.uk.

“This announcement is a huge shock for everyone affected,” said Laura Davison, the NUJ national organiser, while Trinity Mirror NUJ group chapel officer, Chris Morley, said: “This is Trinity Mirror appearing to cross the Rubicon out of print. The scale of job cuts is catastrophic.”

Simon Edgley, managing director of Trinity Mirror Southern, who described the move as a “bold digital-only publishing transformation” for a “digital-savvy audience”, said: “We wholeheartedly believe that the future of our business here in Berkshire is online and this is an important and pioneering step that might, in time, be applicable to other existing markets or indeed new ones.

“Decisions that impact our staff are never easy to make but they are absolutely necessary if we are to continue our transformation into a modern multi-platform publishing operation, with the flexibility and agility to invest and grow our news brands.”

It is difficult to see where a “multi-platform” comes into Trinity Mirror’s thinking when they are actually shutting down printed newspapers and going digital only.

Last week Trinity Mirror reported a 12 per cent fall in print advertising revenue for the 17 weeks to October 26, following a 9 per cent drop for the first half of 2014. Digital publishing revenue was up 44 per cent for the period and Getreading.co.uk has increased monthly unique users by 68 per cent for the 10 months to October, compared with the same period last year, all of which perhaps underlines Edgley’s point.

But the NUJ chapel’s Morley also had a point when he said: “One wonders where the quality journalism will come from when so many journalists are expected to sacrifice their jobs.”

Martin Shipton, chair of the Trinity Mirror NUJ group chapel, said: “This is a watershed moment for the regional newspaper industry. Trinity Mirror is shutting down well-established titles and replacing them with an online news presence unattached to newspapers. So far there is little evidence that an operation of this kind can generate the revenues needed to sustain a workforce of sufficient size to provide a decent news service.”

The weekly Reading Chronicle, which is published by Romanes Media Group, an independent newspaper publisher, becomes the town’s only print title. Its editor Lesley Potter said: “First and foremost it is a sad day for the people who will be losing their jobs and the families affected by redundancy.

“It is also a sad day for the people of Reading to lose the Reading Post. We have been fierce rivals over the years, but we have always had a healthy respect for one another.

“We at the Reading Chronicle, Wokingham News, Bracknell News and Ascot News have absolutely no intention of abandoning print. We have been around since 1825, delivering news to the people of Reading and will have every intention of continuing to publish newspapers the way we have been doing for nearly two centuries.

“We believe our readers deserve to have a choice in how they access their news, whether it’s in print or on our website, and we are going to carry on in that vein.

“We have just moved our head office back into the middle of Reading so we are investing heavily in our newspapers. We are not going anywhere, and we are proud to serve the people of Reading.”