First a confession: I bought into the Hillsborough myth. Well, almost a quarter of century ago it was too easy for an outsider to believe what they read in The Sun – and, to be fair, some other national newspapers – about the tragedy that cost 96 football supporters their lives. 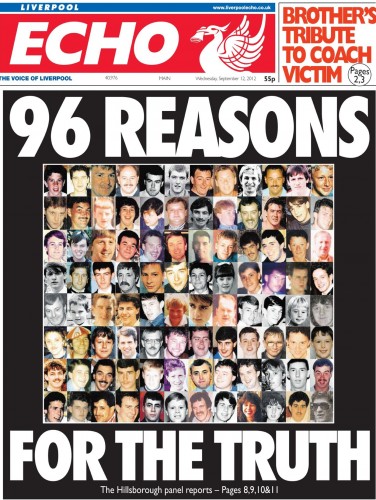 Those of us covering football around that time were accustomed to appalling behaviour by fans, inside grounds and on trains going to them. In the mid-1980s I was caught up in a frightening situation when Manchester United followers charged around Birmingham’s New Street station.

And I was walking towards Oakwell when I saw a pensioner being escorted out of a pub, head bleeding after his innocent lunchtime pint had been interrupted by Birmingham City fans throwing chairs about.

Every club still has its bad boys; Liverpool was no exception then.

So when we read that it was all the fault of drunken Scousers that people died and many more were injured and traumatised, it was all too easy to believe.

Over the years, though, doubts crept in, and today we know the truth – thanks to the tireless work of family members of some of the dead. But also thanks to a local newspaper.

“It was an absolute vindication of the work that two generations of Liverpool Echo reporters had done,” he said. “My sense is one of pride in the people I work with and in the journalism they produced.”

So, a local newspaper never gave up on its own. What Machray described as “dinner-party chat” that tried to persuade him, Chris Oakley (editor of the Echo in 1989) and the two editors in between – John Griffith and Mark Dickinson – to give up the paper’s campaign, seems to have had the opposite effect, spurring them and the journalists involved ¬– Paddy Shennan reported Hillsborough at the time and has reported on it ever since – to even greater efforts to seek the truth.

For his work on Hillsborough, Shennan was named the feature writer of the year at the Regional Press Awards last month when the Echo picked up four of the top prizes, including daily newspaper of the year.

Machray told Press Gazette: “Chris Oakley decided not to swallow the line being spun by the government and the media. That was the moment the Liverpool Echo stood behind the people of Liverpool.”

And the paper’s support never flagged. After establishing ground rules as to how it should deal with relatives of the victims and earn their trust, the Echo kept the issue alive for more than two decades until the HIP’s verdict was delivered. Hardened members of the newsroom wept openly.

Again, we come back to the central point: it was a local newspaper that fought so hard. It is inconceivable that a national title would have been so robust in its defence of those Liverpool football fans. Indeed, a national wouldn’t have bothered at all. Not for the best part of a quarter of a century.

Which brings into sharp focus the vital roles that local newspapers play for communities. Not only for big issues like Hillsborough but also for practical information and snapshots of local life; but mostly for the fact that, so often, local newspapers have been the courageous voice.

The day that local journalists really do become simply “harvesters of content” – as Local World chairman David Montgomery told a Commons select committee  – will be a poor day for newspapers but, more so, a poor day for democracy and accountability.

As the American blogger and columnist, Bill Crawford, puts it, local newspapers get us to start things never started otherwise. The Liverpool Echo’s Hillsborough campaign is all the proof we need of that.