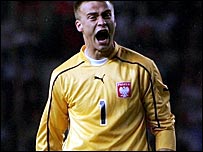 As the former Sun columnist Richard Littlejohn might have said: You couldn’t make it up.

Polish workers, familiar figures in recent times on British building sites or hired as low-charging dependable plumbers, are now being hired by The Sun as sports reporters.

The Sun is launching special Polish language editions this weekend to coincide with the start of Euro 2008, and has been recruiting staff in Warsaw, Krakow and Gdansk rather than in Walsall, Kingston or Grimsby.

The Sun ran a Polish edition earlier this year, and it was rated enough of a success that it is repeating the exercise during the football tournament.

“Apart from ongoing news and material from the English version, the paper will be publishing extra copy

on the Polish team – interviews and analysis,” Jeff Webster, the Sun executive in charge of its Polski edition, was quoted as saying by Polish language daily Metro.

“We’ll be following the Polish team at the games and in our free time also in the English edition. For the whole staff this is a new undertaking and a big challenge, and we’re bringing in a few Polish journalists to help.”

Other reports suggest The Sun has hired four Polish journalists on six-week contracts. One Wapping insider said: “All it has meant is that when you walk around the office now and hear someone on the phone talking Polish, you just have less of a chance of understanding what’s going on than usual.”

The Sun‘s Polski edition will sell for 25p, competing with other Polish language dailies which are other distributed free.

According to Metro, the Daily Mirror is also considering putting out a Polish insert.