Packed stadiums and British success was not something new in 2012. Sixty years ago was also a memorable year of sport. PHILIP BARKER has been dusting off the archives 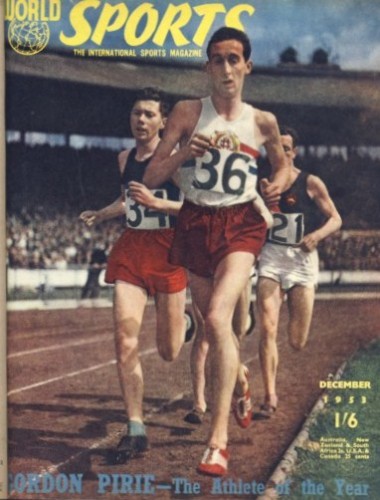 1953 was not only Coronation year but also an Ashes summer. The great Australian cricket writer and former Test batsman Jack Fingleton caught the mood. He called his account, “the Ashes crown the year”.

Making his first tour of England was a young man about to begin his own journalistic career as a crime and general reporter in Sydney: Richie Benaud.

At Lord’s, future SJA member Trevor Bailey held the Aussies at bay for four and a quarter hours in partnership with Willie Watson to force a draw and keep the series level. Later, Neville Cardus described Bailey to his Manchester Guardian readers as “statuesque in the manner of some monumental stonemason emulating Michelangelo. He is not only an anchor for England, he barnacles the good ship to the ocean floor.”

And “Barnacle” Bailey it was forever more.

With the Old Trafford Test seemingly destined for a draw, some reporters opted for the early train back to London on the final afternoon. Imagine their panic when they caught sight of newspaper billboards proclaiming Australia 35 for 8.

Brian Johnston was part of the commentary team for the fledgling BBC television coverage in 1953. By the final Test at the Oval England were at last on the brink and Denis Compton was at the wicket. Brian Johnston was the mike. A new art then; so new, the BBC published a viewers’ guidebook.

“We tried to develop commentary and one of the things we were told was only talk when you can add to the picture,” Johnston once said.

His commentary of the moment the Ashes were won for the first time in 19 years suggests he had followed the advice: “Four runs to get … Is it the Ashes? England have won the Ashes, and the race of all time. What a scene here.”

The ball was engulfed somewhere in front of the gasometers as the crowd streamed onto the outfield at The Oval.

At least the television pictures remain as a record of the event. Video recording techniques had only just been perfected.

The 1953 FA Cup final is the first football match on tape in the BBC library. Not a bad way to start. You will no doubt recall the position. Blackpool had trailed Bolton 3-1 but had pulled it back. As the last minute approached commentator BBC Commentator Kenneth Wolstenholme described what was happening for the viewers watching flickering black and white pictures. “There’s the man who’s really fighting for his cup medal … Could he score the winning goal himself?”

Not quite, but Stanley Matthews, the wizard of the dribble, duly set it up on a plate for Bill Perry to apply the finish Blackpool wanted to win 4-3.

For such drama the BBC paid the grand sum of £1,000 in rights. Wolstenholme never acknowledged a hat-trick for Bolton’s Stan Mortensen, insisting the first goal had taken a deflection off another Bolton player, Harold Hassall.

Desmond Hackett called it “the greatest cup final story of all time”. Sixty years on, many still agree. There is no doubt that the impact of that early TV coverage and the use of the tape’s highlights over the decades since has done much to establish in the country’s collective memory the idea of this being one of the greatest finals of all time, and ensuring Matthews’ enduring status.

This was the post-war boom time. When Pegasus, a combination of university players, including football and cricket writer Tony Pawson, beat Harwich and Parkeston 6-0 in the Amateur Cup, still the biggest margin in a Wembley final, the place was packed.

As part of the FA’s 90th anniversary Hungary visited in November 1953. “Who says these continentals can’t shoot?” asked Wolstenholme as Hungary thrashed England 6-3.

“Did you play in that game Alf?” a reporter later asked 1966 World Cup winning manager Sir Alf Ramsey. “I was the only one that did,” came the reply.

That match at Wembley was played in murky conditions on a November afternoon, but the respected coach and writer Dr Willy Meisl had some bright ideas. “If professional soccer is to survive at all, it can only do so by switching to midweek evening matches and by switching on the lights,” he said.

At Ascot, BBC presenter Peter Dimmock was dressed in morning suit but still looking every inch the RAF officer he once was. He told viewers why there would be no coverage of the final day’s racing. “Some of the equipment has to be rushed up to Scotland to cover the Queen’s entry into Edinburgh.”

Gordon Richards had been trying to win the Derby throughout his career. He achieved his dream at the 28th attempt on Pinza and was instantly summoned to meet the Queen.

If your name was Gordon , 1953 was a very good year. No loneliness for long distance runner Gordon Pirie who was our Sportsman of the Year (the Sports Writers’ Association in those days), before the BBC started celebrating sporting personalities.

Pirie set a world record in the 6 miles at the AAAs and won the 3 miles for good measure.”Nothing should be allowed to depreciate Pirie’s superb effort the result of careful training and his own superb stride and rhythm,” was The Times verdict.

The grand finale to the sporting year came six days before Christmas. Wales met the All Blacks. Wales trailed for much of the match but won when Clem Thomas (later to become a leading rugby writer) kicked across field and Ken Jones reached the ball first then sidestepped an opponent to touch down. Wales won 13-8, but have not beaten the All Blacks since.

The match was televised live and there were dark mutterings in The Times about the threat to attendances after Newport’s match against Harlequins attracted only 500 that same afternoon. It was a debate that would continue over the next 60 years.