LONG-serving SJA member and award-winning newspaper columnist Anton Rippon has been dropped by the paper for which he has written for the past 20 years.

Rippon, who was named Newspaper Columnist of the Year at the 2017 Midlands Media Awards, had penned more than 1,000 weekly columns for the Derby Telegraph since 1999. For the past ten years he also produced a weekly Derby County piece and supplied sport and general news features to the paper.

He said: “I’ve been told that success is now judged purely on website page views not print sales. My column might be popular with newspaper readers, but it’s thought that if it went on line it wouldn’t get enough clicks. So my contract has ended. It is a most amicable parting, though. Times change. Life moves on.”

Rippon worked as a reporter for what was then the Derby Evening Telegraph and as a feature writer for the Nottingham Evening Post before going freelance in 1981.

He covered the Midlands and South Yorkshire football beats for the Sunday Telegraph, wrote for The Times, The Independent and The Guardian, and worked for BBC local radio before launching Breedon Books in 1984. 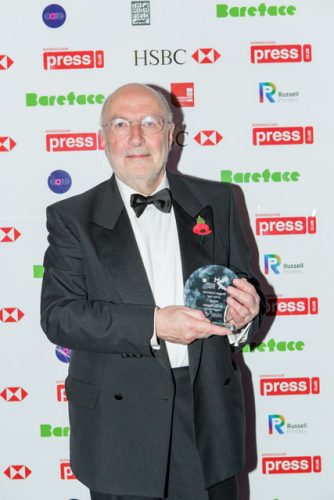 Forging business relationships with regional newspapers throughout the British Isles he developed Breedon into one of the UK’s most successful sport and local interest publishers.

In 2003 he sold the company and concentrated on the freelance agency, Rippon Features, he set up with his daughter, Nicola Rippon, herself an author of several history books. Until this week they produced the Derby Telegraph’s weekly eight-page nostalgia supplement.

I started in the days of manual typewriters and scrounging a telephone, when dinosaurs roamed the Earth. There are now different ways of delivering news, but print editions giving readers good local content and building up trust with them could still prosper given a chance

Rippon also worked for the media department at Derby County whose former players’ association gave him its 2015 annual merit award. In 2016 the University of Derby awarded him an honorary masters degree for services to journalism.

He said: “I have a great affection for the Derby paper which I first joined in 1965. It’s been a privilege to work with so many talented journalists, in particular the current sports department. On top of Derby Telegraph and Burton Mail sport pages, I’m told they are taking on more responsibility for Nottingham Post sport pages with Leicester Mercury sport pages further down the line. They are one of the best regional sports teams in the country.

“I started in the days of manual typewriters and scrounging a telephone, when dinosaurs roamed the Earth. There are now different ways of delivering news, but print editions giving readers good local content and building up trust with them could still prosper given a chance.

“A few years ago I saw a cartoon where a youngster is asking an old journalist: ‘You mean you used to take what was on your website and print it on paper?’ It was funny then, but, regionally at least, print is now becoming a neglected afterthought.

“The other day I was telling a young reporter that we called the stop-press the ‘fudge’. He said: ‘Sorry, what was the stop-press?’ So maybe it’s time for me to go. I’m not retiring, though. I’ve signed contracts for four books for a major publisher over the next three years.”

Rippon, who edited the 2016 and 2017 editions of the SJA Year Book, will continue to write for sportsjournalists.co.uk. He says with a smile: “This is one website I thoroughly enjoy – and, as an old journalist once told me, a man who works for nothing is never out of a job.”