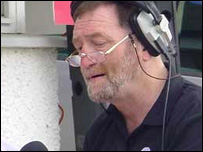 who subsequently became a respected broadcaster for the BBC and an actor, who died last month, aged 56.

Gravell’s funeral service was staged this afternoon at his beloved Stradey Park, Llanelli, attended by 10,000 friends, team mates, colleagues, politicians, and family. Bilingual throughout, the service was broadcast live on two television channels, and included tributes from the likes of Rhoddri Morgan, Wales’s first minister, and Gerald Davies, his team mate in the national side and colleague in the press box in more recent times.

“Today is a remarkable testimony to the enormity of this Welshman’s benevolent heart,” Davies said. “I shall not say that we shall not see his like again, for I hope we do. There could be no poorer way of honouring the memory of Grav’s than for us to assume that his spirit has perished, never more to arise. Should not his generosity, his kind and gentle heart remain a standard by which we measure ourselves? Should not this be the inheritance that Grav bequeaths to us all?”

Here, reprinted from the BBC website, is Gwyn Thomas’s tribute to Gravell:

There used to be
Detonations on the telly –
It was Grav discussing rugby.

There used to be
From the radio great warmth surging –
Grav conversing.

When he wore red, his country’s jersey,
Then, in him, our old Welsh nation
Blazed, a raging conflagration.

He stood at the Eisteddfod
A giant with a mighty sword
Above poets, all renowned,
Above poets chaired and crowned.

Our Welshness was in us far stronger
For our knowing him.

Hearts beat a little happier
After talk and banter
With him.

In his heart there was a light
That made all those who met him
A little better.

Now, tonight, it is November,
Dark and angry;
Without him it is winter.

There is silence on the screen,
Nevermore will he be seen
On the telly, live.

But his passion will not alter,
His exuberance not falter,
His great spirit will not wither,
While we are here to remember.

There was something in him
That kindled in us, all who met him,
The potency of graciousness;
And for that we thank him.