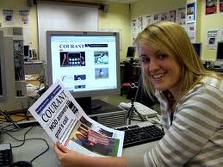 Old timers still get slightly sniffy at the idea of anyone needing a university education to work in journalism. Ageing hacks who left school at 16 are highly suspicious of those who can quote swathes of Nietzsche or speak a language other than English.

Personally, I think that the ability to drink 10 pints through your underpants equips you very well for the demands of the job. But these days, pretty well everyone who starts in journalism comes with a degree attached. It shows an element of independence (unless you’ve lived at home), the ability to hit some sort of deadline and an understanding of research.

What it doesn’t demonstrate (though many claim this talent on their application forms) is any writing ability.

I hate to disillusion those who feel that the ability to write 15,000 words the role of the clown in Shakespeare’s plays equips them with core journalism skills.

The biggest problem with graduates is teaching them to write. Most believe that their aptitude for using lots of long, pompous words and create ponderous sentences which often last for days are surefire entres to the media.

“Try that on The Sun, or even on Heat, and see how far it gets you,” I tell them. But some never work out that their role is not to win a Pulitzer or delight people with the mellifluous flow of language: it’s to convey information.

why most reputable journalism courses want you to have undertaken some work experience.

It doesn’t mean that working on the university newspaper was a waste of time: far from it. But all too many are self-indulgent twaddle, killing trees for nothing and spouting worthy articles on “My Advice to Obama on the Israeli Situation” or “How to Manage the Economy”, from someone who’s still in their second year and already £10,000 in debt.

Nor, I’m afraid, are reviews of non-famous bands like Crispy Ambulance playing at a local club going to persuade NME that you’re the next Adrian Devoy.

If you’ve done some news on the university paper, that’s going to help. I’ve seen some decent news stories from Hull, Nottingham, Bristol and Durham universities. But don’t expect your 1,000-word review of the 2nd XI playing Oxford Brookes’ seconds to have FourFourTwo fighting for your signature.

But what will impress far more is that you’ve stuck your head in the lion’s mouth and seen what “real” journalism is like on a newspaper or a magazine.

OK, that’s not easy if you’re at Aberdeen or Falmouth. “I tried the local paper but they wouldn’t take me,” is an oft-heard wail. But what about holiday times?

Of course, it might interfere with your plans to spend the summer at Glastonbury or Aya Napa. But are you serious about journalism, or just a butterfly? If you can’t organise a week or two in your year to get some work experience (and some cuttings), then you’re unlikely to convince an editor that you’re going to make a great reporter.

Wanna be a magazine journalist? Then find magazine placements. Newspapers, radio, TV: same story. But don’t apply to nationals (unless your mum’s the editor).

And keep away from the glossies if you want a magazine job. Most of them have very efficient systems for dealing with workies, but it won’t be much to do with journalism. Women’s mags in particular love the fact that there are always lots of eager young things to handle the photocopying, post and sandwich runs. If you’re really lucky, maybe you’ll get to write a caption (that a sub-editor will rewrite).

That sort of experience can actually put you off journalism, as can two weeks on a national, where reporters and subs aren’t famed for their patience and understanding.

And why bother anyway? Most of them are cutting down on staff. Even experienced journalists can’t get a job there. They certainly aren’t going to offer you a football writer’s job just because you’re expecting a 2:1 in English Lit.

The answer: start at the bottom. Show some humility. Your local paper, especially if it’s a free sheet, will probably be pleased for an extra pair of hands. Doesn’t matter that you don’t work on the sports desk. Show you’re adaptable. If you want to be a rugby or boxing writer, Rugby World or Boxing News may take you. But you’ll enhance your CV almost as much by spend a fortnight on Fresh Produce Journal or Car and Accessory Trader.

Best of all, you’ll probably get some cuttings: real words printed on real pages, maybe even with your byline. That’s the first step to impressing those cynical editors who still believe all graduates should undertake compulsory national service.