DELHI DIARY: Sent on a mission to an Indian marketplace, DAVID HARRISON found himself forced to use the time-honoured News of the World phrase and make his excuses and leave…

It was never going to be an easy one to crack – tracking down the illegal betting houses in Delhi. 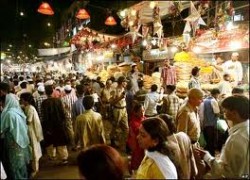 The recent cricket spot-fixing scandal exposed by the News of the World traced a route back to the Indian subcontinent. But finding the end of the trail proved to be impossible.

In a break from the synchronised swimming, archery and badminton, it seemed to offer a worthwhile diversion.

It began at my hotel in Delhi. The bell-boy who had helped me get a local SIM card for my mobile phone seemed a good starting point. Endlessly cheerful, he had promised to solve any problems during my stay.

But when I mentioned I was looking to find a gambling den, the smile disappeared from his face. “Oh, no, no, no, sir. I don’t know anything about that.”

Out on the street, the bloke selling bottled water from a stall seemed like a good bet (no pun intended). But at the mere mention of my quest, his eyes shifted worryingly to the machine gun-wielding soldier patrolling nearby. A shake of the head was his only other response.

The betting industry is obviously very much an underground activity in Delhi, so I decided to go underground.

The Palika Bazaar is a vast network of walkways below street level offering fake Barcelona and Manchester United shirts, dodgy watches and computer products and other illicit goods. If I was to find anyone to help my search, it was here.

But a couple of casual inquiries brought more deadpan responses until finally I was approached by a shifty-looking character who had obviously been made aware of my business.

He sidled up to me and started to whisper out of the corner of his mouth. Now, surely I had struck gold.

In the best traditions of the News of the World, I made my excuses and declined his offer and a polite question about betting houses was greeted with a shrug of the shoulders.

It seems that illegal gambling has been driven out of reach – certainly for the duration of the Commonwealth Games,  where every effort has been made to clean up the city of any persons or activities which might cast it in a bad light.

If only they had been so pristine in their preparations where it mattered most.

Pigeon droppings in the swimming pool, blocked toilets in the changing areas, the sewage system clogged up by condoms in the Athletes’ Village – the lack of basic sanitation has shocked first-time visitors to the country.

On one day this week, the Times of India carried three front page stories alongside its Games coverage. One revealed that a lawyer had been spared the death penalty for raping and murdering a junior colleague 15 years ago.

A second told of a cab driver found guilty of raping and murdering a customer in a case which lasted almost four years to complete.

A third reported the acquittal of six students accused of gang raping a 23-year-old American because the evidence of the alleged victim was unreliable.

Closer to home, an unnamed Welsh athlete has complained about being harassed by a man inside the Games’ Village, taking pictures of her with his mobile phone camera before trying to barge his way into her room.

If all this paints a picture of a country morally and hygienically corrupt then, of course, it is a distorted one.

There is a charm and gentleness about the majority of citizens who are ready and willing to offer support and help through the many organisational problems which the Games have brought to this vast city.

It has been easy to take cheap shots. Like the New Zealand TV presenter who caused a diplomatic incident by repeatedly referring to Delhi’s Chief Minister Sheila Dikshit as Dick Shit.

Government officials demanded an apology from the New Zealand high commissioner and insisted that all future references should use the correct pronunciation of her name – Dixit.

There is talk of Delhi launching a bid to stage the Olympics in 2020. They are unlikely to find too much support, certainly not from those who have attended this gathering of the Commonwealth countries.

In fact, I would have a flutter on them not getting the vote for at least another 30 years.

If only I could find somewhere to have a bet.

This is an edited version of a column that first appeared on the News of the World website, and is reproduced here with the author’s permission.