No sooner had one of the country’s leading football writers published his book on England’s regular disappointments in international tournaments than the national side presented him with ample material for another sorry chapter. ERIC BROWN reckons Fifty Years of Hurt should be a set text for the FA

Imagine the scenario. A disastrous campaign ends in defeat, humiliation, recriminations, inquests and the resignation of the boss. Not the EU referendum, but the fate of the latest England football team (I use the word “team” loosely) to promise much yet underperform spectacularly. 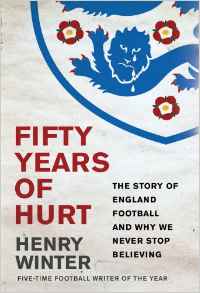 When I started to read this book, a party of young lions, the pride of their country, were about to depart for France with high hopes of actually achieving European championships credibility. We didn’t expect too much, although one Mail on Sunday writer actually forecast a semi-final place for Roy Hodgson’s squad.

The lions performed like pussycats and were, as so many England squads before them, home before the postcards.

This all happened after the book was published, and will no doubt be the subject of an extra chapter when it goes to paperback.

But much of Henry Winter’s excellent analysis of England flops since Bobby Moore memorably lifted the World Cup from the Queen at Wembley 50 years ago applies nicely to this latest setback.

It is so topical that every FA Council member should be sent a copy to digest.

This is a top-quality read, as you would expect from The Times man, a five-time winner at the SJA Sports Journalism Awards, who has watched every England game for the last 22 years. Winter’s tale traces England’s failures and disasters since July 30 1966, when Alf Ramsey conquered the world, he considers the reasons and offers solutions for the future.

Over the course of more than 40 interviews, with key figures in England’s tournament history such as Jack Charlton, Alan Mullery, Peter Shilton, Glenn Hoddle, Gary Lineker, Alan Shearer and Roy Hodgson, all sorts of theories for failure surface.

Most have been trotted out before, yet Winter offers a much deeper insight into why England are no longer a top-rated football nation. Is it time to stop believing now England are not even second-raters but, perhaps thanks to Iceland, can be dismissed in tournament finals as no hopers?

After all, what incentive is there for a young English player to improve when he can earn £2 million a year at the age of 17 in a Premier League reserve side?

Many readers will be surprised that Winter manages to retain such optimism given the gloom of the past half-century, relieved only by England’s semi-final places in the 1990 World Cup and 1996 European championship.

England were simply left behind as the game moved into a new era both on and off the pitch driven by television cash. The FA blazers failed to embrace major advances in coaching, tactics and PR.

Winter reveals a story of the prospective England manager ready to stage a powerpoint presentation at his interview only to discover the FA had no means of displaying it.

I count myself fortunate to have been present during England’s World Cup campaigns of 1966 and 1990 and I sympathise with generations of fans left distraught at seeing their team struggle to emerge from group stages at tournaments.

Even the so-called Golden Generation let us down. The conundrum of fitting Paul Scholes, Frank Lampard and Steven Gerrard together into an England team was never solved and no one had the courage to decide which one of them must be dropped for the sake of tactical expediency.

Winter concludes with his suggestions to make England great again.

One in particular deserves mention. When Graham Kelly produced his “Blueprint for Football” that sowed the seeds of a Premier League, it proposed a top division cut from 22 teams to 18. But club chairmen blocked that and a compromise was reached with 20. Winter believes the FA should fight the Premier League for a further two-club reduction to allow players more training time, FA Cup replays should be scrapped and a winter break introduced. Good luck with that one. Just imagine the hand-wringing among television executives left with no football to show.

So, in 2016 and 50 years of hurt later, what does the new England manager require? A goalkeeper who doesn’t turn to jelly in tournament finals, full backs who can defend, central defenders who are not lumpen statues incapable of bringing the ball out and playing a killer pass, midfielders who are fit and can run a game, strikers who turn up and wingers who can actually cross the ball.